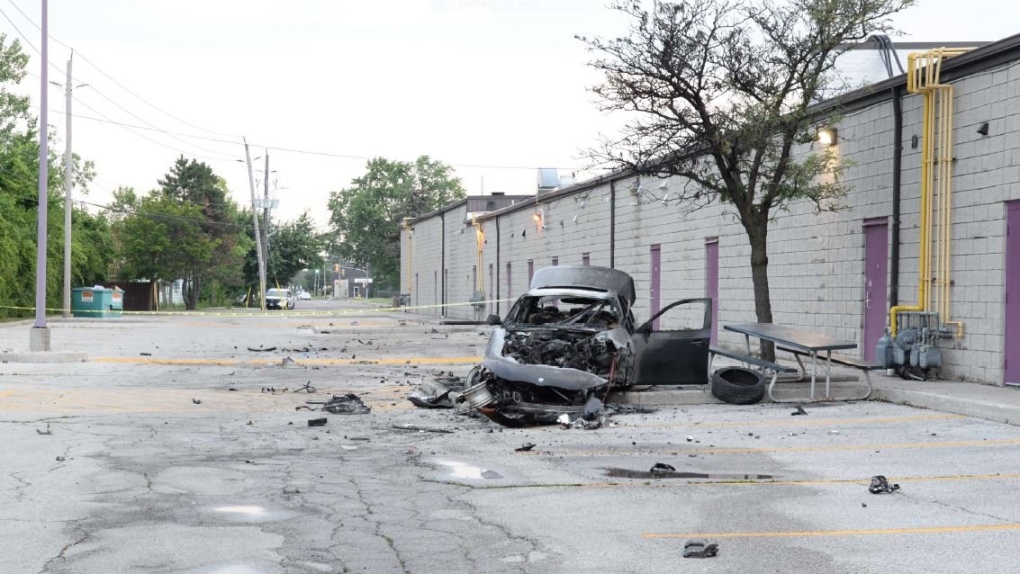 A burned-out BMW car is seen in a Windsor parking lot after a crash on July 28, 2019. (Courtesy Windsor Police Service)

A young man is facing a list of charges after a black BMW was found wrecked and burning in a central Windsor parking lot.

Police report on Sunday, officers responded to a report of a single vehicle crash around 2:30 a.m. where McDougall Street and Howard Avenue meet near Brack Animal Hospital.

The responding officers report finding a crashed car and a large debris field on the roadway leading to the totaled car.

According to police, the vehicle had been heading southbound on McDougall Street when it failed to negotiate a left turn in the roadway and jumped the curb — smashing into a number of parking lot curbs before finally coming to a stop.

There were six people in the car that were able to escape as the vehicle burst into flames.

First responders were able to put out the fire.

All six people were sent to hospital and, luckily, escaped life-threatening injuries.

Ricardo Siwak, 19, of Windsor, is charged:

In light of the serious crash, the Windsor Police Service is reminding the public of the dangers associated with impaired driving, saying “there is no excuse not to plan ahead when consuming alcohol or cannabis.”

If you spot a suspected impaired driver, you’re asked to call 911 with information such as a vehicle description, make, model and licence plate number.