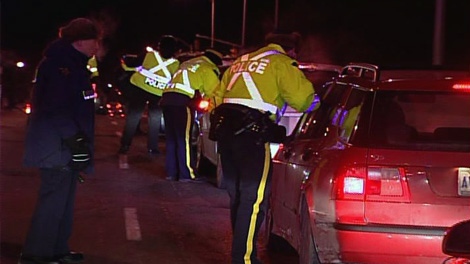 ESSEX COUNTY, Ont. -- Essex County OPP were busy cracking down on impaired driving over the weekend.

Six people were charged with alcohol-related offenses between Nov. 1 - Nov. 3.

On Friday, OPP participated in the annual launch of this seasons Red Ribbon Campaign in support of MADD. Within an hour of the media event, officers arrested an alleged impaired driver who had been involved in a crash.

“Throughout the weekend, officers responded to additional collisions and reports of erratically driven vehicles resulting in further impaired driving and alcohol-related charges,” says Inspector Glenn Miller. “Why drivers would place themselves and others in such dangerous situations and disrespect not only the law but the safety of our citizens is very disappointing.”

Around 2:45 p.m. Friday, police responded to the two-vehicle collision on Highway 3 at the intersection of Labelle Street Windsor. Through investigation, police say one of the drivers exhibited signs of impairment and was arrested.

Theodore Rock,46, of LaSalle, is charged with impaired driving by alcohol or drug, operation while impaired - blood alcohol concentration 80 plus. Rock is scheduled to appear in the Ontario Court of Justice Windsor on Nov. 14.

Also on Friday, OPP members conducting a R.I.D.E. program in the Kingsville performed a roadside screening device test on a driver resulting in a reading of fail.

Jesse Horvath,29, of Kingsville, is scheduled to appear in the Ontario Court of Justice Windsor on Nov. 20, charged with operation while impaired - blood alcohol concentration 80 plus.

During the same R.I.D.E. initiative, a vehicle was stopped and two 17-year-old passengers were charged with the Liqour Licence Act of Ontario offence of a person under 19 having liquor.

On Saturday at 11:30 p.m., OPP responded to a single-vehicle crash on County Road 23 in Essex, where a pickup truck had entered the ditch after failing to stop at a stop sign.

Sebastian Beben, 44, of Windsor is charged with impaired driving by alcohol or drug, operation while impaired - blood alcohol concentration 80 plus. He is scheduled to appear in a Windsor court on Nov. 19.

On Sunday at 10 p.m., an OPP officer stopped an erratically driven vehicle on Talbot Street West in Leamington. Police say the officer formed the grounds the driver was impaired by alcohol or drug and placed them under arrest.

German Cervantes-Vargas, 26, of Leamington, is charged with impaired driving by alcohol or drug and operation while impaired - blood alcohol concentration 80 plus.