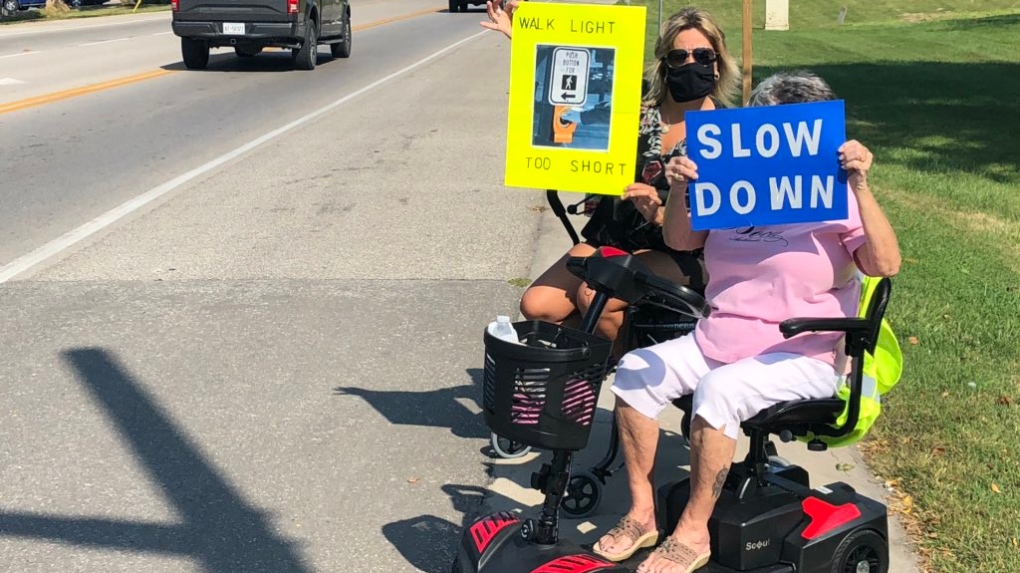 Seniors in Amherstburg protest to extend cross-signal times and get drivers to slow down at busy intersection in Amherstburg, Ont. on Saturday, Sept. 26 2020. (Alana Hadadean/CTV Windsor)

WINDSOR, ONT. -- Seniors in Amherstburg rallied Saturday to push for drivers to slow down.

The peaceful protest saw around 30 people at the intersection of Sandwich Street and Pickering Drive.

“We got to do something to save someone's life and that's what this is all about,” organizer Clifford Connell said.

Many of the protestors held signs directed at drivers to let off the gas.

Concerned citizens said they want to raise awareness to their town and drivers of the problems they face.

He said the group has valid concerns.

“When you look at the timing of the crosswalk here, the walk symbol give them 15 seconds to cross across Sandwich,” Rozankovic said. “If you were in a walker and possibly if you are not 15 seconds is not a lot of time.”

The protest was a chance for the group to call for improvements to crossing signals.

Ellen Badet, 81, has been living in nearby apartment building for a year and a half and says she’s almost been killed five times walking through the crosswalk.

Her message to drivers is to, “slow down, have a little patience for seniors getting across the street because many of us don’t have cars and we would like a little consideration.”

Concerned seniors are gathered at a busy intersection in Amherstburg for a peaceful protest. They want drivers to slow down and are requesting crossing signal times extended. @CTVWindsor pic.twitter.com/R7KrFodYT6