School closure extended for Windsor-Essex students until at least Jan. 23

WINDSOR, ONT. -- Teachers and students will have to wait longer than expected to go back into the classrooms.

Remote learning will continue at least until Jan. 23, the end of the provincial lockdown.

Alan Saad’s five-year-old daughter is in senior kindergarten and is struggling with remote learning, but he understands why it’s been extended.

“She’s just not thriving and I think what she’s missing the most is the interaction with her other classmates,” says Saad. “I think once corona virus is gone and we hope that’s sooner than later, I don’t think there should be any shift to online learning in the future.”

Dr. Wajid Ahmed released his recommendations on Thursday, saying students should continue online learning until at least the end of the provincial lockdown.

Amhed said Thursday morning if the provnce did not extend it, he would have issued his own order to ensure local students continue remote learning.

"If it comes to make that local recommendation, I've already made that and I will move forward with an issuance of an order if needed," says Ahmed. "So bottom line is, for Monday, whether the province does it or I do it, it will be an online learning model for our community."

Ahmed says they looked at the evidence and COVID-19 statistics carefully before making the decision. They have also had discussions with the ministry of education.

“It was not an easy decision, I can tell you,” says Ahmed. 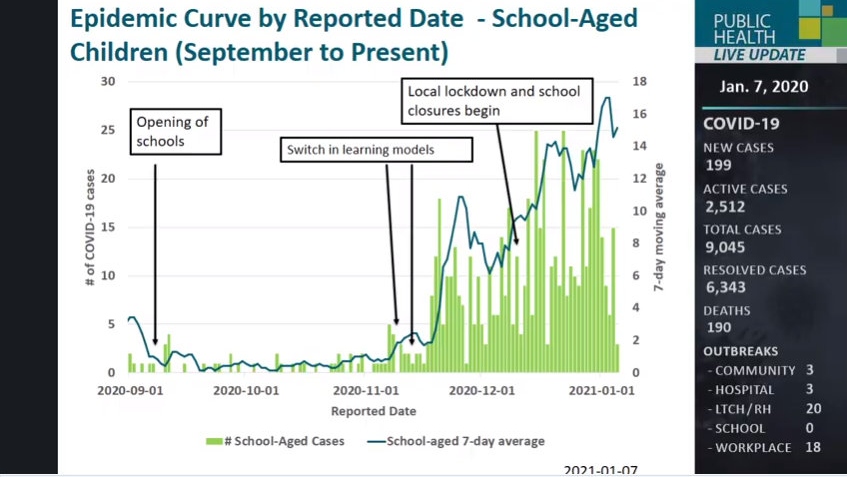 Windsor-Essex had 199 new cases of the virus on Thursday, with three additional deaths. The per cent positivity rate for the region is 12.3.

Between Dec. 11 and Jan. 5, there have been 333 cases among school-aged children.

On Dec. 11, WECHU ordered learning to move out of the classroom and transition online effective Dec. 14, but the order expired as of 12:01 a.m. Saturday.

Ahmed says he is focusing on what is best for the students and residents in Windsor-Essex, and that is to stay out of classrooms for now.

The Windsor Essex Catholic District School Board issued a statement saying it will follow Ahmed’s recommendations.

We will follow the @TheWECHU's recommendation to continue online learning until Jan. 25. Find out more here: https://t.co/yZIQ5i0qdM pic.twitter.com/R0V3aIyZ19

“We will continue to follow the same procedures we have been following this week,” said the WECDSB, which means all students, except those with special needs will continue online learning.

“Students with special needs will still be able to attend school in person and our schools will remain open for those educators who wish to attend for the purposes of conducting online learning.”

The Greater Essex County District School Board issued a similar statement for the continuation of remote classes.

On-line learning only for #GECDSB students to continue through at least Jan. 23rd - https://t.co/xJVbPLFM55

Around 40 per cent were related to outbreaks.

“In December, when we switched to online learning, we have seen a significant surge in cases but all of them were linked to household contacts,” says Ahmed.

Between Dec. 11 and January 5 there have been 333 cases among school aged children.

“We can anticipate that January we are looking at between 350-400 cases among the school aged children,” says Ahmed.

He says he can relate to what parents are going through, since he also has two children in the school system.

“I can imagine the challenges every parent has to face when making this decision on their own,” says Ahmed. “But looking at what we are seeing right now, the data, I tend to make my decision based on the public health impact of this evidence.”

After Jan. 23, Ahmed says they will look at data to decide if it needs to be extended again.

He says there is no clear formula, but he would like to see the community COVID-19 cases going down before students go back to the classroom.

The Windsor Essex Catholic District School Board is calling the extended school closure a proactive measure.

“I think when our rates are high in the community we have to expect that could translate into cases at schools,” says superintendent of education Melissa Farrand.

“Dr. Ahmed has made the right decision we believe that’s the best decision in terms of keeping the community safe,” says Mario Spagnuolo, local president of the Elementary Teachers Federation of Ontario.

Ahmed says the health unit will review the matter after the latest extension, but would like to see cases go down before students go back to the classroom.

“I hope that this would give parents some sense of planning of what they need to do in terms of their child care needs.”