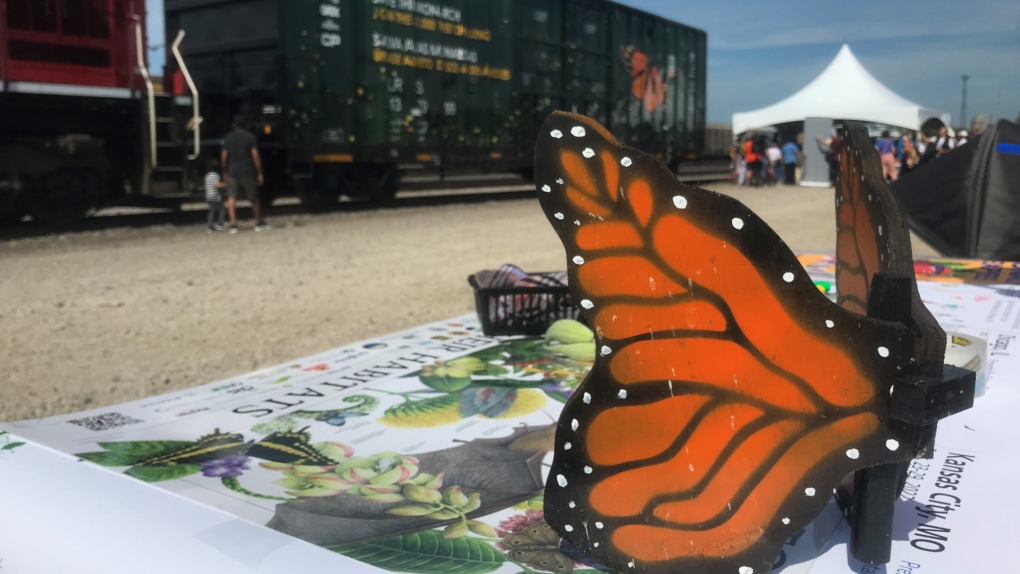 A unique Canadian Pacific engine and boxcar will leave Windsor Saturday to follow the migratory path of the endangered monarch butterfly.

"We’re at a tipping point," said David Eaton, a Rotarian from Monterrey, Mexico who was in Windsor Saturday to launch the Monarch Express.

"The (monarch) butterfly population has dropped 90 per cent in the last 20 years," Eaton told the crowd at the CP Rail Yard off Janette Avenue.

"Large populations (of butterflies) can handle extreme climate events,” Eaton said. “But as the population drops and these extreme weather events continue, we’re at a tipping point where the population may not survive, if we can't reestablish the biological corridor."

Eaton said during their migration, monarch butterflies "jump" from Point Pelee to different "habitat islands" where milkweed is grown.

Over time, as milkweed has been destroyed by pesticide use, Eaton says the butterflies have nowhere to land and so they cannot continue on to Mexico for the winter.

The Monarch Express is designed to serve as an awareness campaign to get encourage people, living along the migratory path, to plant milkweed and stop using pesticides so they can "reconnect the fragmented habitat" according to Eaton.

They also hope to raise enough money to plant 60,000 oyamel trees in the El Rosario Butterfly Sanctuary in Michoacan, Mexico.

Eaton says the trees are "critical" to the monarch butterfly’s survival in Mexico.

Windsor is the lone Canadian stop for the Monarch Express, in homage to Windsorite and Rotary International President Jennifer Jones.

The train will stop in 28 different cities before arriving in Mexico on Nov. 5.

Prince Harry and his wife, Meghan, offered a sweeping indictment of Britain's media and the racism they believe has fuelled coverage of their relationship in a Netflix documentary series that promises to tell the "full story" of the couple's estrangement from the Royal Family.

Ontario pharmacists will be able to prescribe the antiviral COVID-19 treatment Paxlovid to patients as of next week.

The federal government appears to be on the verge of presenting new legislation aimed at strengthening Canada's early learning and child-care system. On Thursday at 11 a.m. ET, Minister of Families, Children and Social Development Karina Gould will be making what her office is calling a 'national announcement' on this topic.

Two organizers of the 'Freedom Convoy' won’t receive frozen donation funds to pay for their legal defence of a $300-million potential class-action lawsuit.