Riverside trail extension up for debate at Tecumseh Council

Dueling advocacy groups are anxiously awaiting a decision on the proposed extension of the Riverside trail in Tecumseh.

“All the different vegetation, landscaping that’s going to be perhaps interrupted, moved, changed, people are being impacted,”says Crowder.

Crowder, with the Rethink the Trail committee, says there are other options for a Riverside drive trail that are less invasive for the 88 properties impacted.

“It’s the gap between Ganatchio Trail and Lakewood,” says Crowder. “Well that gap does not have to be filled by a nine-foot swath of asphalt.”

The proposed extension would start near the Windsor-Tecumseh border at Winclare Drive, where the Ganatchio Trail ends, and extend along the south side of Riverside to Manning Road. 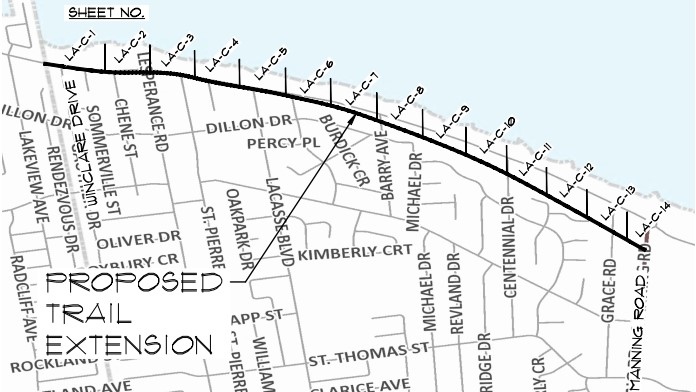 An opposing advocacy group, Extend the Trail, is happy with the proposal for a multi-use path that’s going to city council Tuesday night.

“I think a multi-purpose trail, cycling, scooters everything getting to Lakewood Park, but it also accessible for people with limited abilities,” says Lisa Laveck, with Extend the Trail.

The Riverside trail project was proposed to council in December 2016 and is part of a 20-year Active Transportation Plan. It has been addressed through public consultations and engineers.

“I strongly support not only the engineering consultants Bezaire and Associates, as well as the town engineers,” says Laveck. “I think they’ve done their due diligence.”

Tecumseh Council will review the report Tuesday night and make a decision on how to move forward.

Councillor Andrew Dowie says it will be hard to please everyone.

“Where the two sides shall meet, this is what makes the decision very, very tough,” says Dowie.