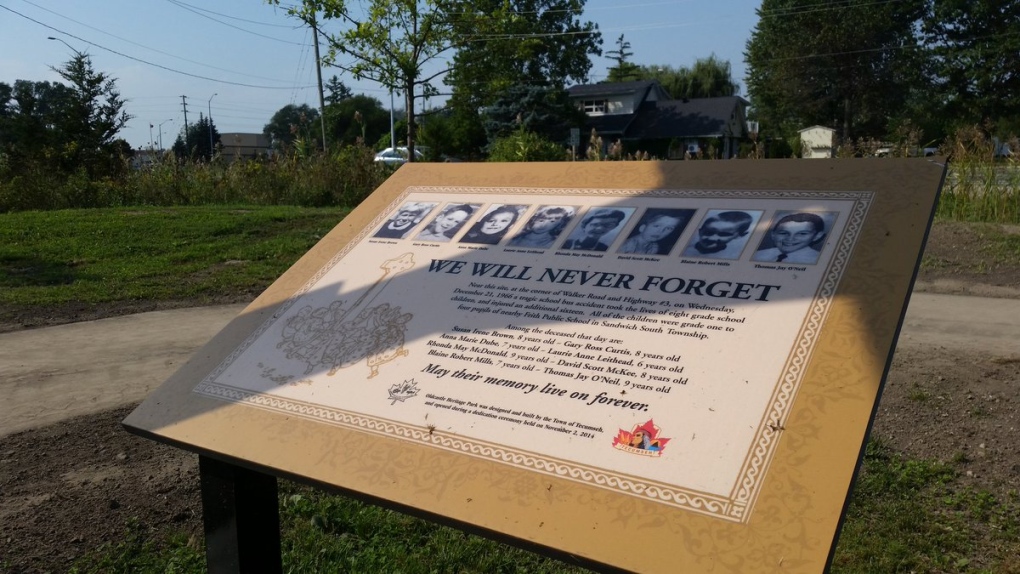 Her sister, along with 23 other children were riding the school bus home from school, when a truck filled with sand turned north onto walker road, from Highway 3.

“All you could hear was ambulances and sirens, and people hollering to get help,” says Skilton.

According to Skilton, the 5th wheel on the truck broke and caused the box of sand to tip over, on top of the bus.

When she was at the scene of the accident, she remembers a man walking by her.

Eight kids were killed in the crash, while sixteen others were injured.

"I don't think I thought of anybody being killed. I just thought there was kids that were going to be really hurt," says Skilton.

Two years ago, the town of Tecumseh planted eight trees at Oldcastle Heritage Park, to honour the children who died.

Wendy Cunningham was just five years old when her and her mother witnessed the tragic crash. She is now an organizer for the 50th anniversary of the school bus crash.

"We thought this was a perfect time 50 years later to honour the children and their families and make it a homecoming for the residents and the community," she says.

A dinner will be held Friday evening at the Royal Canadian Legion, on Howard. Then, a gathering will take place Saturday at the Oldcastle Heritage Park at 2p.m., followed by a dinner at St. Mary’s Hall in Oldcastle.