WINDSOR, ONT. -- Windsor-Essex and Chatham-Kent will spend at least another week in the red zone of Ontario’s COVID-19 response framework.

The province released the list of regions moving levels on Friday and neither health unit was included.

Windsor-Essex will be going into its seventh week in the red tier, while Chatham-Kent moved to red on March 22.

This is what’s allowed in the red zone of the province’s reopening framework.

Windsor-Essex medical officer of health Dr. Wajid Ahmed said some of the region’s indicators still are in is in the red zone as he gave the weekly epidemiological summary on Friday.

“There are some areas of concern in our region, but generally I think we are doing much better and I say that with a grain of salt in my mouth, to make sure that we continue to do better,” said Ahmed. “Right now our case rates are low. We need to make sure we keep doing the good job that we are doing right now in keeping the case counts down.” 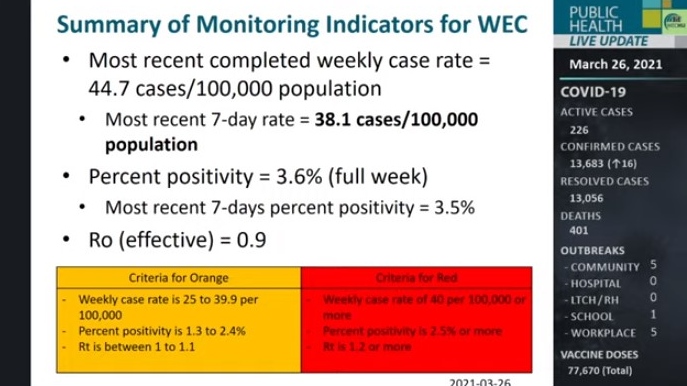 Chatham Kent’s Medical Health Officer Dr. David Colby also said Thursday he would be surprised if restrictions are loosened on Friday for his region.

Windsor moved from the red zone into lockdown on Dec. 14 and then back into the red level on Feb. 16.