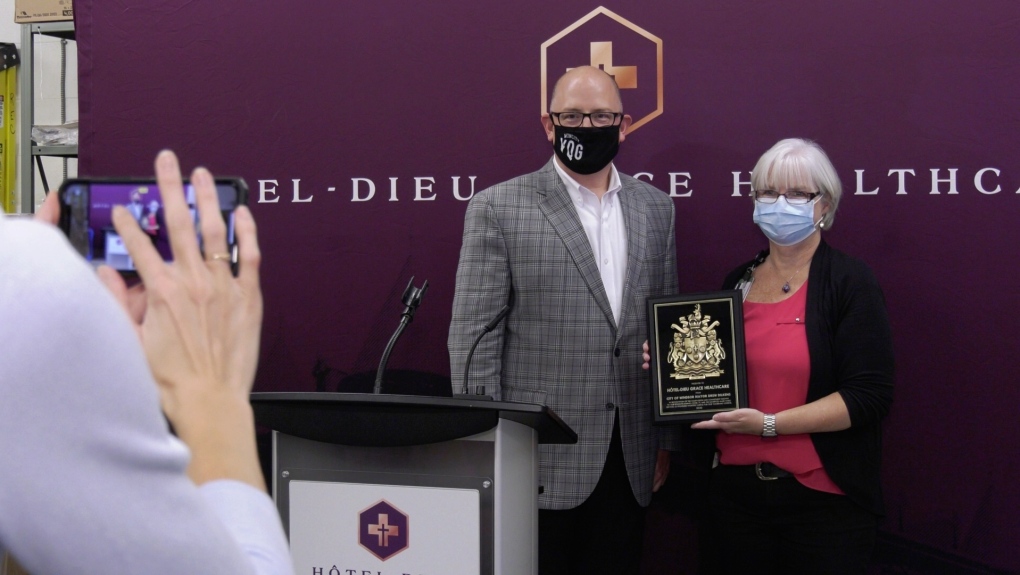 Drew Dilkens, the mayor of Windsor, presents a plaque to Janice Kaffer, the president and CEO of Hotel-Dieu Grace Healthcare, to thank healthcare workers at the hospital for their work during the COVID-19 pandemic on Thursday, October 8, 2020. (Ricardo Veneza/CTV Windsor)

WINDSOR, ONT. -- A donation of thousands of masks, gloves and gowns to Hotel-Dieu Grace Healthcare in Windsor serves as a reminder the pandemic isn’t going to be over any time soon, according to the hospital’s president and CEO, Janice Kaffer.

On Thursday, Kaffer accepted the donation of 40,000 disposable masks, 4,000 pairs of gloves and 600 Level 2 gowns from the Healthcare Heroes Fund, established by the Toronto Foundation.

"This is just one way that we can support those who are on the front lines who are out there and are at-risk of COVID-19," said Danny Chang, a Windsor-native who works with the public affairs group.

In her remarks to gathered media at an afternoon news conference, Kaffer noted the sizeable donation of personal protective equipment (PPE) will help replenish its stock as the hospital expects some version of pandemic measures to be in place at the Prince Road facility until likely 2022.

"We’re going to have some measure of protection and some measure of — not normal — for a period of time up until probably 2022," said Kaffer. "That’s realistic. If it gets better faster, cool, that’s great. We’ll be happy with that but, it behooves us to plan and so we’re planning until that time frame."

Kaffer says the donation will be especially helpful as staff are burning through the equipment more quickly now than earlier in the pandemic.

She explains because elective surgeries have resumed at acute care hospitals and outpatient visits are restored, more protective equipment is being used as hospitals work through their backlogs.

"We’re working hard to catch-up on the backlog of services that we provide in terms of outpatient rehabilitation and mental health services so, the needs we have for protective equipment continue and grow," said Kaffer.

The donation of hospital-grade PPE is also seen by healthcare professionals as a reminder that while the case count may be low in Windsor-Essex, the fight against COVID-19 is not over in the area’s hospitals.

While the donation has tangible benefits, Kaffer hopes it also sends a message — don’t let off the gas.

"I think in many ways many of our hospitals and many of healthcare agencies kind of felt as though at the end of wave one going into wave two that there was a little bit of a relaxation and maybe folks thought the pandemic was gone but, for us in healthcare, it’s been full speed ahead since the beginning and we really haven’t let up much," said Kaffer.

For staff at the hospital, the donation is a reaffirmation that the challenges healthcare workers face through the pandemic have not been forgotten.

"That the community is still with us, still behind us, still thinking about us, all of us in healthcare, and are still there to support us," said Kaffer.

Windsor Mayor Drew Dilkens attended the news conference to thank both Chang and colleague Kayla Benjamin with the Toronto Foundation for their donation.

"It’s certainly very much appreciated and it was worth coming out here to recognize this incredible contribution from young folks — it’s almost like a war effort in some ways," said Dilkens.

The mayor noted the community support that’s resulted from the challenges of the pandemic is unlike anything he’s seen before.

It was in that spirit that the mayor presented Kaffer with a plaque from the City of Windsor thanking healthcare workers at Hotel-Dieu for their dedication during times over the past several months.

The black and gold plaque noted the "compassion and commitment" shown by healthcare workers and the "sacrifices made" while serving on the frontline of the pandemic.

"He surprised us," said Kaffer. "Honestly, our staff will be very grateful for the message that the mayor delivered today."

A new home for the plaque will be found in a place of prominence at the hospital.