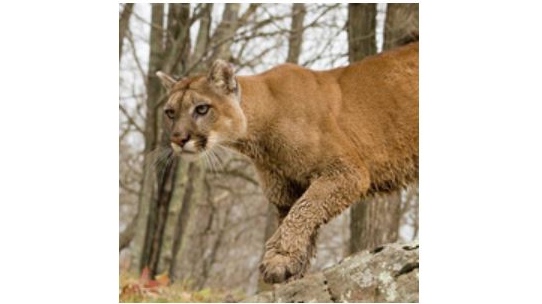 A cougar is seenin this file image on the Ministry of Natural resources website. (J.D Taylor / Ontario.ca)

LASALLE, Ont. - LaSalle police are looking into a report of a possible cougar sighting in the town.

The caller told police the animal, which came out of a nearby bush area, appeared to resemble a cougar.

Police say there have been no other reports of possible cougar sightings this year.

Const. Terry Seguin says any other past reports of cougar sightings to the LaSalle Police Service have either been unfounded or unproven.

In May 2017, two LaSalle residents reported a possible cougar walking behind houses in the 2500 block of Todd Lane.

Officers are asking if anyone may have a home surveillance system to check to see if they may have captured an image or video of this animal in an effort to confirm its presence in the community.

The Ministry of Natural Resources says cougars are an endangered species. In Ontario, cougars are most likely believed to live in northern Ontario because of the remoteness of the habitat.

However, the MNR says there have been many reports from the southern part of the province.

For more information on cougars in Ontario contact the Ministry of Natural Resources at mnr.nric.mnr@ontario.ca or 1-800-667-1940.