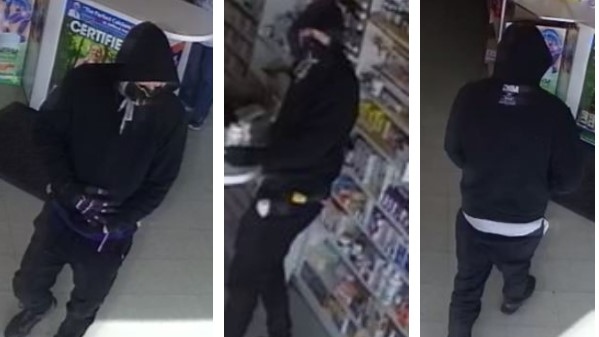 WINDSOR -- Windsor police are looking for two suspects after an armed robbery on Dougall Avenue.

Officers responded to the 2900 block of Dougall Avenue in relation to an armed robbery that had just occurred at a pharmacy on Tuesday around 11:25 a.m.

Through investigation, police learned that two male suspects arrived at the pharmacy on foot, entered the business and demanded prescription medication and money.

Police say one of the suspects was in possession of a black handgun at the time of the robbery.

A quantity of prescription narcotics and Canadian currency was taken during the incident.

The suspects fled the area on foot at approximately 11:28 a.m., last seen westbound on Dougall Avenue prior to police arrival.

The first suspect is described as a white man, 5'6 - 5'8, medium build, wearing a black sweatshirt, grey gloves, grey mask with a white design on the mask, blue jeans, a white strap hanging out of a back pocket, white shoes with a black stripe on the heel. This suspect was armed with a black handgun.

The second suspect is described as a white man, 5'6 - 5'8, medium build, wearing a black sweatshirt with "NBA" on the back neck area, a black mask with a white logo, white t-shirt under the sweater, dark pants, and black shoes.

They are looking for any information in relation to the incident and seeking the public's assistance in helping to identify the suspects.

Police say the suspects are considered to be armed and dangerous. The public in reminded to never approach a suspect and to call 911 immediately.