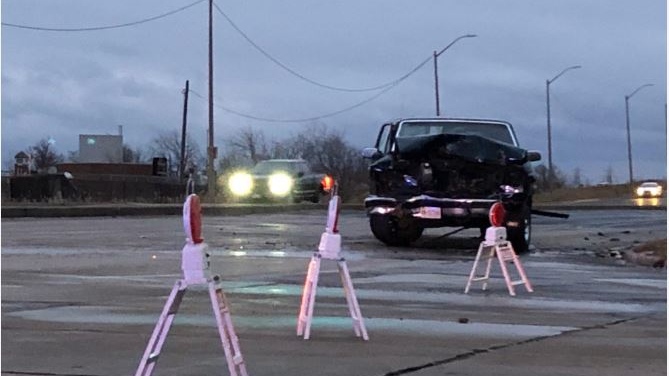 Scene of a crash that sent three people to hospital in the intersection of Lauzon Parkway and Forest Glade Drive in east Windsor on Saturday January 4, 2020. (Photo by AM800's Gord Bacon)

A 29-year-old Lakeshore man is facing charges after a fatal crash in east Windsor.

Windsor police responded to the intersection of Lauzon Parkway at Forest Glade Drive for a report of an injury accident on Saturday around 3:45 p.m.

Upon arrival officers confirmed the collision involved a green Ford pick-up truck and a grey Dodge Journey. Both vehicles had extensive damage.

Emergency personnel were on scene and transported three people to hospital.

Police contained the scene and launched an investigation.

Officers interviewed witnesses who were still on scene.

It was determined that the 29-year-old man had been the lone occupant and driver of one of the vehicles. He sustained non-life-threatening injuries.

The second vehicle was occupied by a man and a woman. The man succumbed to injuries sustained in the collision and passed away. The woman suffered life-threatening injuries.

Police say they determined Hayes was criminally responsible for the collision. He was arrested at the hospital without incident.

He was later transported to Windsor Police Service Headquarters in order to attend court in relation to the charges.