WINDSOR, ONT. -- An effort is underway to stop the City of Windsor from removing another makeshift off-road bike track on the city’s east side.

An online petition formed over the weekend, appealing to residents to save the dirt bike jumps set up in Little River Corridor Park.

“It just doesn’t make sense to any of us at all,” says Garth Ollett. “Especially now with the COVID, you know? There’s not much to do!”

Supporters say the track returned to the park shortly after city crews demolished and removed a similar set up in 2017.

Ollett tells CTV news he hopes officials will see the homemade track as an opportunity, rather than a liability, noting the demand for cycling is high. 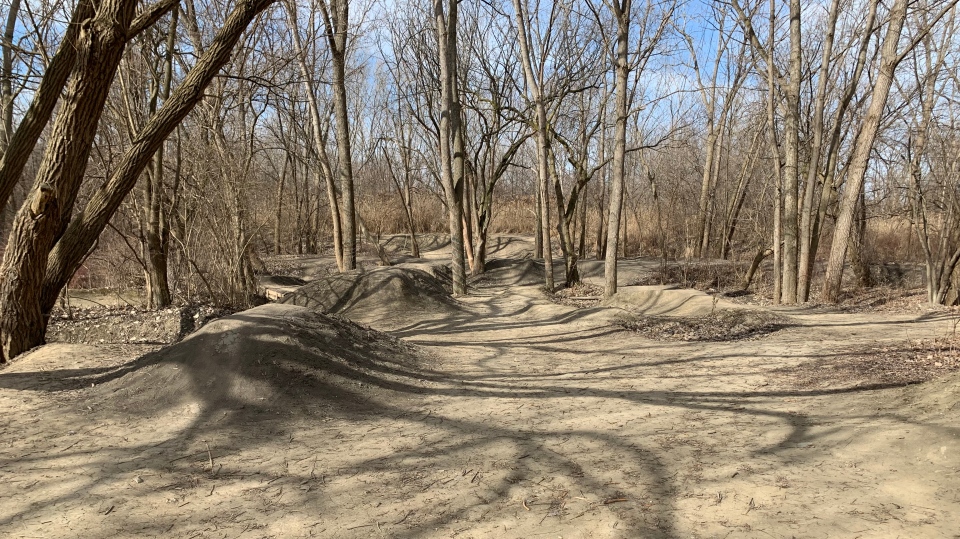 “Every other city they seem to have so many bike parks, but Windsor seems to be lacking in that area,” he says.

The City of Windsor approved and constructed two new trails in 2019, costing around $500,000, to provide off-road cyclists places to go after the city shut down similar makeshift bike trails that they said were damaging the environment surrounding Little River and Black Oak Heritage Park.

Ollett says he hopes enough signatures will appear on the petition to have city staff reconsider removing the park.

“Make it right and do what they need to do,” he says. “Get the proper paperwork in place because you’ll be ripping out a lot of people’s daily activities and hobbies and interests.”

The manager of parks for the City of Windsor James Chacko says officials are actively monitoring the site and plan to remove the unauthorized jumps and track when conditions are better.

“It’s against the parks bylaw for anybody to construct or alter trails,” he says.

Chacko tells CTV News the city received several complaints and that the unofficial park has the possibility of disrupting species at risk, compromising natural vegetation and poses as a liability risk.

“There’s areas to properly do these type of activities and then there are areas where you’re not supposed to be doing it so certainly,” he says. “Channel all of your energies into utilizing the proper locations.”