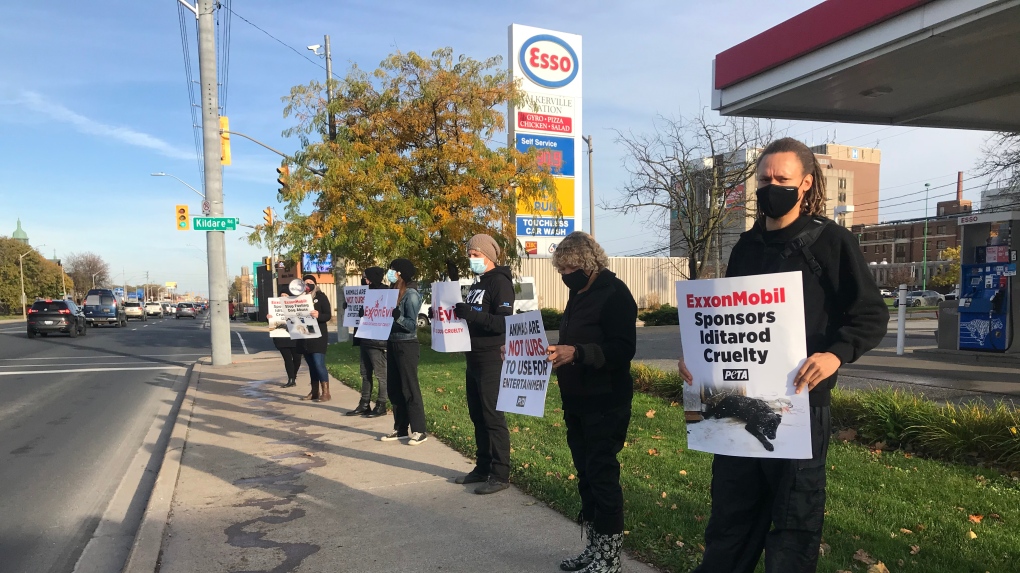 Armed with yellow tape and a gas jug filled with fake blood, a dozen PETA supporters protested cruelty to dogs in front of the Esso gas station at 1809 Tecumseh Road East Wednesday afternoon.

“Today’s race is nothing but a blood sport, it’s only for fame and fortune. There’s no benefit for the dogs. Esso’s parent company, Exxon Mobil can stop funding the Iditarod and end the cruelty to these dogs,” says PETA activist Micheal McDowell.

The group of concerned citizens say ExxonMobil, the parent company of Esso is one of the last major sponsors of the controversial Alaskan Iditarod dog-sled race. They want the company to cut ties and stop funding the dog racing industry.

“This race is just pure evil. We can show human athleticism, we don’t need to be supporting cruelty and harming dogs. These dogs sometimes die from choking on their own vomit from running this far,” says McDowell.

Today’s action follows PETA protests outside ExxonMobil headquarters in the U.S. and the company’s gas stations around the world.

McDowell says Esso, who is a major sponsor of the Iditarod dog race continues to pump money into the annual race even as other sponsors have pulled out.

“Other companies like Chrysler Wells Fargo and Alaska airlines have all cut ties after Peta made aware that over 150 dogs have died since the Iditarod has begun another fueling cruelty to dogs. They're chained up year-round when they’re not running this race,” says McDowell. “No dog would willingly run over 1000 miles.”