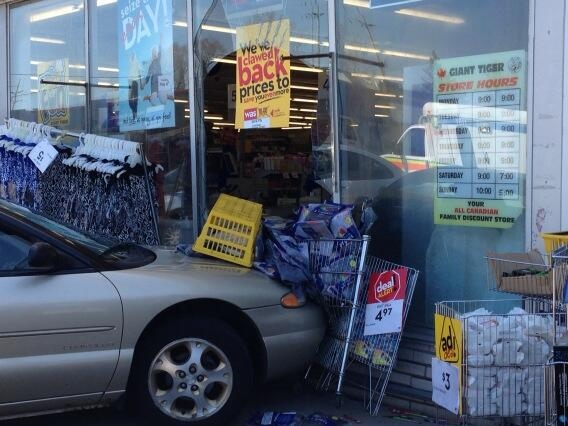 Windsor police say the Giant Tiger building had about $3,000 damage after getting hit by a car in Windsor, Ont., on Monday, April 22, 2013. (Michelle Maluske / CTV Windsor)

Windsor police say a 52-year-old woman was hit as a car crashed into a Giant Tiger store in east Windsor.

A 65-year-old woman was waiting for a parking spot in front of the store. Police say as she was pulling into the spot, she hit the accelerator instead of the brakes.

Officers say the car lurched forward and hit the 52-year-old, who was walking out of the store. It then crashed into the building.

The pedestrian received a non-life-threatening injury to her leg and was taken to hospital. The driver of the car was not hurt.

The damage to the car was estimated at about $1,000. The front of the building sustained about $ 3,000 damage.

Police say no charges are expected to be laid.