WINDSOR, ONT. -- A new ad campaign to get the Canada U.S. border open that’s picking up steam stateside is now coming to Canada.

“President Biden, Prime Minister Trudeau, my fiance and I are separated by your closed border. It’s just policy to you, but it’s prison to us,” the video declares.

The advertisement will start running on CTV in Ottawa next Wednesday and Thursday — and the creator — American John Adams — wants the Prime Minister to take notice. 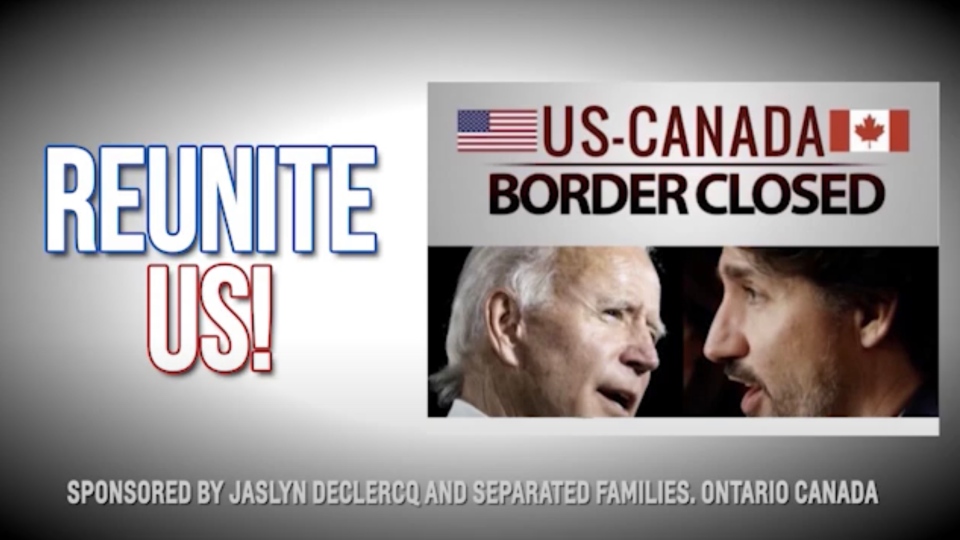 “I’ll tell you the only way people like that are not going to see my ads is if they do this (cover their eyes) and plug their ears. Cause I’m going to be in Ottawa like the fog,” Adams says.

The Florida resident has property in Vancouver which he hasn’t been able to visit since the onset of the pandemic.

He’s produced ads running more than 100 times in three border city markets stateside since mid-May, pushing for a plan to reopen the border.

“Stop kicking the can down the road, because you’ve been kicking it down for 14 months and nothing’s changed,” Adams says.

He self-funded the first ad for about $3,000 and has since launched a GoFundMe page, where he’s collected more than $15,000 — money he says will be his “Calvary” in this fight to get the border open.

But the ads needed a Canadian face — and that’s where Jaslyn DeClercq comes in.

“It has been long enough. I am ready to have my family together again and I will do anything I have to to get that done,” says DeClercq, who lives in Tillsonburg, but her partner lives in Ohio.

The couple has a child together and pre-pandemic, they connected every weekend. But now, her American partner doesn’t meet the exemption requirements to come to Canada, keeping the family separated.

This pushed DeClercq to join with Adams for the Canadian ad campaign.

“There’s a lot that I can deal with, but the hurt on my kids is a breaking point,” says DeClercq. “We want a plan. Something. This never ending maybe, it’s too much.”

Just last week, Prime Minister Justin Trudeau said 75 per cent of people need to be vaccinated before the gates can open.

“We will continue to work with our partners and hopefully get to a better place,” he said on May 17.

It’s an issue that’s divided, even among Canadians.

According to a recent survey from Angus Reid, 23 per cent of respondents say it should open now, 29 per cent say the summer is a good time while another 27 per cent are eyeing the fall, 21 per cent say don’t open the border until 2022.

DeClercq is clear: she doesn’t want her partner to miss another of their children’s birthdays.

“Hopefully we get the right ears and make some movement,” she says.