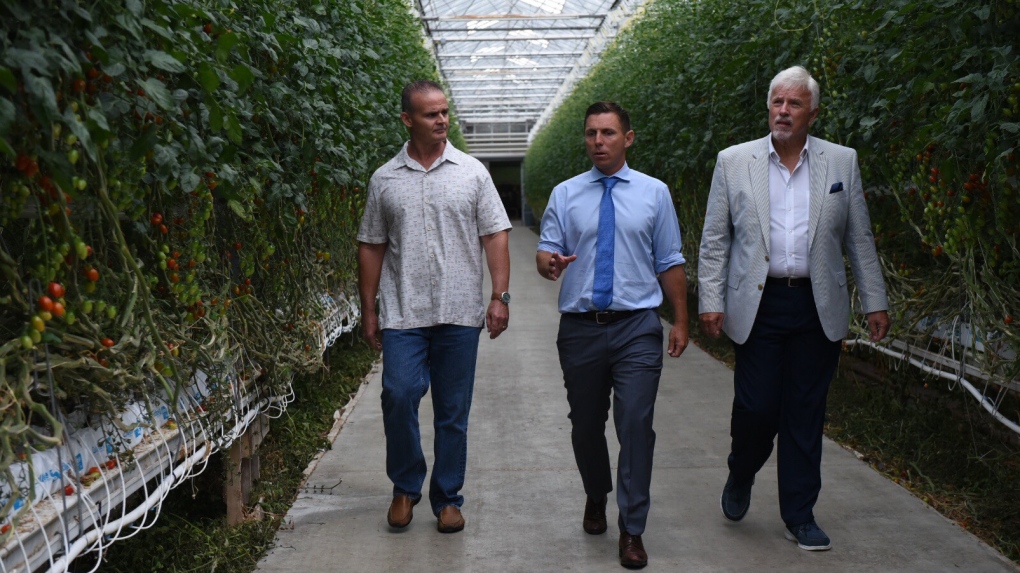 Ontario PC Leader Patrick Brown wants to scrap cap and trade and replace it with a carbon price that he says would give relief to the greenhouse industry.

Brown was in Kingsville Monday morning to tour the Cecelia Acres greenhouse.

He says the Kathleen Wynne Liberals are making life harder for the greenhouse industry under their cap-and-trade scheme.

The greenhouse industry uses natural gas to heat its greenhouses to create an artificial climate to grow plants. In using natural gas they create carbon dioxide that they use as a food source through photosynthesis for their vegetables and flowers, which then expel oxygen instead.

Since greenhouses use the carbon dioxide they produce, Brown says there is a business case to exempt them from carbon pricing.

In addition, he says the Ontario greenhouse industry competes against jurisdictions without carbon taxes and therefore they should not pay carbon taxes on products they export.

Alberta and BC greenhouse industries get rebates that cover 80 per cent of the cost of those provinces’ carbon taxes.

The Ministry of Environment and Climate Change Statement released the following statement on the issue:

“Ontario needs a realistic approach that balances action with affordability to fight climate change. Patrick Brown’s carbon tax scheme – which he carefully avoided mentioning today – accomplishes neither. His scheme would cost families and businesses four times more without guaranteeing any reductions. It would also scrap the investments we are making to help businesses reduce costs, including up to $115 million over four years for agricultural businesses like greenhouses.

The harm Patrick Brown would cause to the sector doesn’t end there. His opposition to the Fair Hydro Plan means greenhouses using under 500 kW would no longer be eligible for the 25 percent reduction on their bills. Should he choose to scrap the Industrial Conservation Initiative, larger greenhouses would lose the chance to save as much as one third off their bills too. Our recently announced $19 million Greenhouse Competitiveness and Innovation Initiative, intended to help the industry lower production costs, increase productivity and improve quality, could also be at risk.

The reality is that despite opposition claims, Ontario’s greenhouse industry is growing. The independent Ontario Greenhouse Vegetable Growers expects the industry to keep growing by about 150 acres a year. Producers like NatureFresh and Greenhill Produce have also recently announced expansions totally over $100 million that will create hundreds of new jobs, building on the 81,000 jobs already here.

In this environment, Ontario needs a balanced plan to fight climate change. And with the federal government moving forward with a plan that will soon see all of Canada covered by a carbon price, we need a solution that makes sense for Ontario. That’s why our plan, which includes a cap on the pollution businesses can release into the air, is best. It guarantees emission reductions at the cheapest price for people and the economy while also reinvesting every dollar to help keep costs for business low. Patrick Brown’s inefficient, ineffective and unaffordable carbon tax scheme doesn’t even come close.”