TORONTO - Ontario's minority Liberal government will hold on to two of the five seats they had on the line in provincial byelections, while the NDP will gain at least two new seats.

And the Progressive Conservatives have claimed a coveted Toronto seat in Etobicoke Lakeshore, their first victory in the city in over a decade.

The Liberals have hung on to the ridings of Scarborough-Guildwood and Ottawa South, former premier Dalton McGuinty's old riding.

But they lost Windsor-Tecumseh and London West to the New Democrats.

The byelections were the first opportunity to see how voters were judging Premier Kathleen Wynne after six months on the job.

Her government has been dogged by scandals inherited from McGuinty's administration, including the costly cancellation of two gas plants.

The Liberals were one seat short of a majority before the five resignations, and Wynne will still lead a minority government Friday. 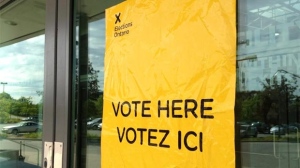 Full coverage of the Windsor-Tecumseh byelection