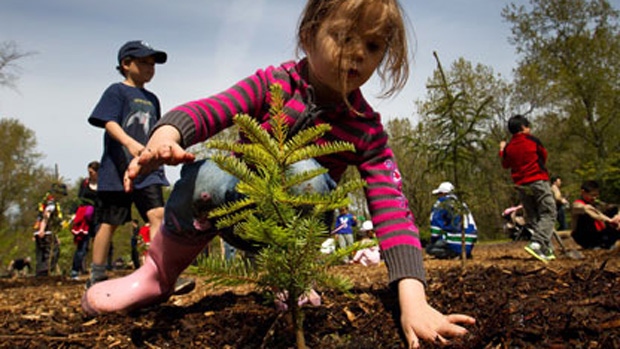 TORONTO -- Ontario is cancelling a tree planting program, with those involved warning the move will lead to the loss of jobs and environmental benefits that forests provide.

The Ministry of Natural Resources and Forestry told Forests Ontario the day after the Progressive Conservative government delivered its budget this month that the 50 Million Tree Program was being eliminated.

Rob Keen, CEO of Forests Ontario, said since 2008 more than 27 million trees have been planted across Ontario through the program, which saved landowners up to 90 per cent of the costs of large-scale tree planting.

It was started as a carbon sequestration program, Keen said, but planting that many trees also helps clean the air and water, protect shorelines and reduce erosion.

About 40 per cent forest cover is needed to ensure forest sustainability, Keen said, and the average right now in southern Ontario is 26 per cent, with some areas as low as five per cent.

The program's annual budget was about $4.7 million, Keen said, and Forests Ontario was told it was being cancelled as a way to cut provincial costs.

"Premier (Doug) Ford wants to reduce the deficit and this was...something they thought was expendable," Keen said.

The majority of the funding went to Forests Ontario's planting partners, such as conservation groups, stewardship groups and First Nations, who worked with landowners to get trees planted, Keen said.

The CEO of one of the main nurseries that grows seedlings for the program said the cancellation of the 50 Million Trees Program will lead to more erosion in flood zones, as well as poorer air and water quality, warmer lakes and streams without forest cover to shade them, and less wildlife habitat.

"It may be a way for the government to save some money, but it's very short-sighted and it's going to cost us a lot more in the future," said Ed Patchell.

Patchell said the loss of the program means about 30 to 40 per cent of Ferguson Tree Nursery's base income will disappear, and he will likely have to cut six to eight full-time and seasonal staff.

He predicted the cancellation would also lead to layoffs at organizations such as conservation authorities, which partner on the tree planting.

A spokeswoman for Natural Resources and Forestry Minister John Yakabuski said the government is committed to balancing the budget in a responsible manner.

Justine Lewkowicz said in a statement that the forestry industry, which depends on a sustainable supply of wood, is a responsible steward of the province's forests.

"On average, the forestry industry plants 68 million trees per year, creating jobs for foresters, nurseries, and tree planters," she wrote.

She did not say how many trees are harvested per year.