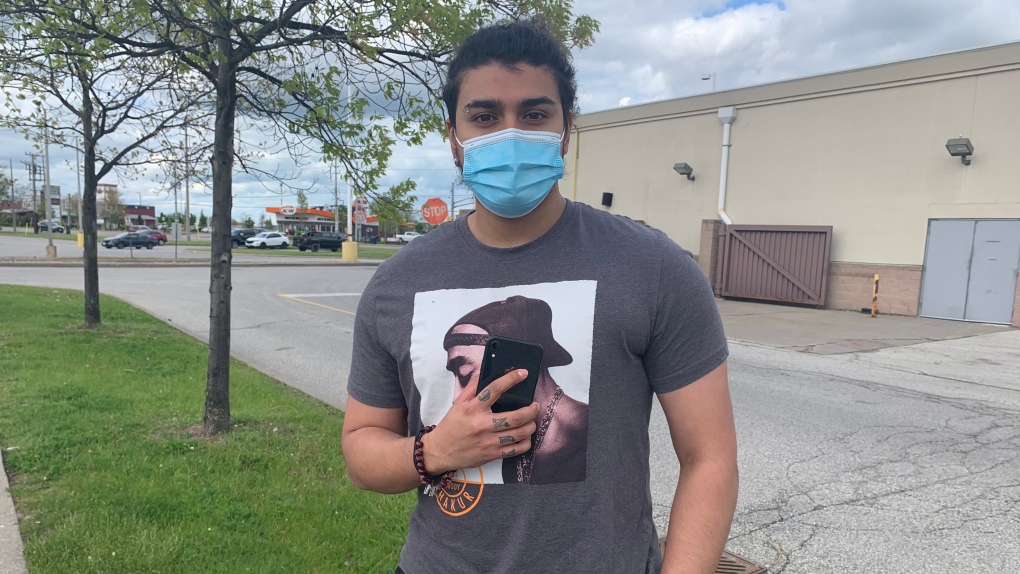 Diego Doucette, who lures potential predators on online dating apps into meetings where he confronts them on camera, poses in Windsor on May 5, 2021. (Rich Garton/CTV Windsor)

WINDSOR, ONT. -- Diego Doucette is taking the law into his own hands, but police and a criminal defence lawyer warn against what’s known as online vigilantism.

Going by the name “community protector” Doucette says he is posing as a minor in adult dating apps in order to confront potential sexual predators. He says he then posts the alleged interactions online, for all to see.

“I want to be the community’s protector,” Doucette says. “If I can protect anybody from experiencing something like that, I’ll do it at my very best.”

Doucette says he does this because he is still haunted by his childhood memories. He says he was raped at four years old.

“Seventeen years later, I still deal with it to this day, and it’s still true,” says Doucette.

Two weeks ago, Doucette says he started posing as a minor on online dating apps hoping to lure out potential predators to meet in person, with his camera rolling.

“It’s two down. I’m two and zero right now. It just makes me happy to know that justice is being done,” Doucette says.

After each confrontation, Doucette says he calls police and hands over his chat history and videos.

While police are taking his evidence they’re asking Doucette to stop.

“You never know how somebody is going to react when they’re exposed or confronted,” says Sgt. Jeff Taylor of Windsor police. “Things can turn violent. If they happen to be in a vehicle, they could take off and strike somebody else, a civilian or you, yourself could be hurt.”

“There’s a number of times when the suspect is already on our radar and if they get exposed prematurely they can destroy all the evidence that we already started to gather and our case is shot,” Sgt. Taylor says, warning there could also be legal repercussions.

“Unfortunately for these vigilantes, the criminal code says that child pornography can be in any form, visual, audio, written,” says Sgt. Taylor. “So when they’re online and they’re purporting to be a 14-year-old and the conversation becomes sexual, that vigilante is essentially creating child pornography.”

Doucette says it’s not about him — it’s about taking alleged child predators off the street, one at a time.

“You are guilty, 100 per cent at that point. That’s the way I put that out there,” says Doucette. “So I can understand, 100 per cent, that what I’m doing could affect the trial and everything.”

“If they’re being published on YouTube or online, what the vigilante is doing is being accuser, judge and jury and executioner, all in one fell swoop,” Cudmore says. “So you deny the fair process.”

Cudmore calls this ‘citizen entrapment’ — where someone is lured into potentially committing a crime they otherwise may not have committed.

Cudmore says he would move to exclude evidence gathered on those grounds.

“That’s one of the reasons why it’s better to leave these investigations to authorities and police is they know what they’re doing,” the long-time defence attorney says. “And they don’t tend to get prosecutions thrown out because someone has violated the rights of the potential accused.”

Despite this knowledge and ongoing requests from police to stop, Doucette says he’s encouraged by the online feedback and plans to keep going.

“I want to change my community so I’m going to be that change,” he says.

“I pray that no one in my community becomes another victim and potential survivor.”