One in five sausages tested in Canada contained meats not listed on label: study 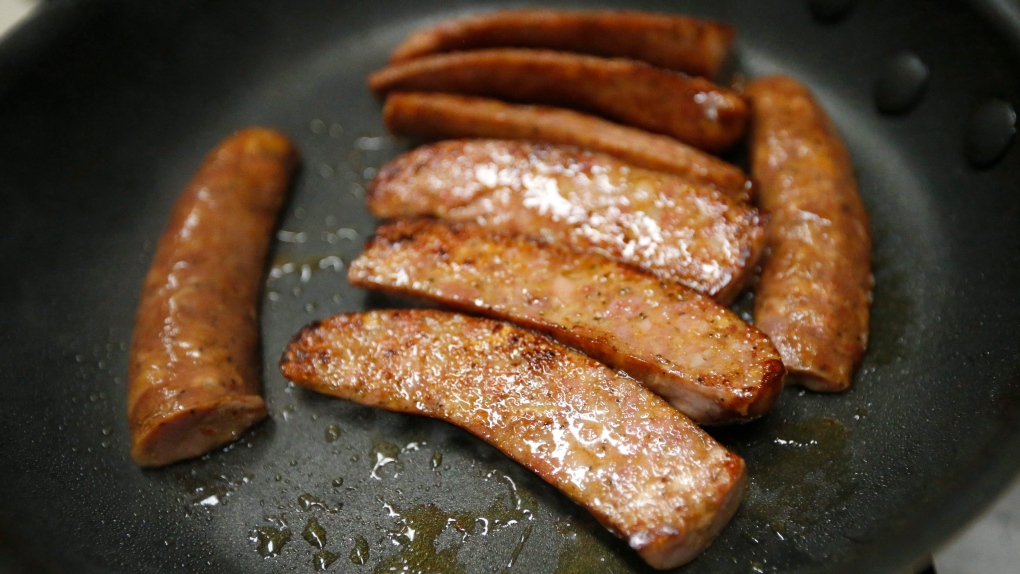 In this March 21, 2017 file photo, a sample of wild boar sausage simmers in a frying pan in Springfield, La. (AP Photo / Gerald Herbert)

A federally funded study has found that 20 per cent of sausages sampled from grocery stores across Canada contained meats that weren't on the label.

The study, published this week in the journal Food Control, was conducted by researchers at the University of Guelph and commissioned by the Canadian Food Inspection Agency.

It examined 100 sausages that were labelled as containing just one ingredient -- beef, pork, chicken or turkey.

"About one in five of the sausages we tested had some off-label ingredients in them, which is alarming," said Robert Hanner, lead author of the study and an associate professor with the Biodiversity Institute of Ontario at the University of Guelph.

The CFIA reached out to Hanner for the study after the European horse meat scandal in 2013, where food labelled as beef was found to have horse meat -- in some cases beef was completely substituted by horse meat.

The goal of the study, the federal food regulator said, was to examine scientific methods used by Hanner to see if the CFIA could use them in its regulatory practices. The scientific tools showed promising results, the CFIA said.

Seven of 27 beef sausages examined in the study contained pork. One of 38 supposedly pure pork sausages contained horse meat. Of 20 chicken sausages, four also contained turkey and one also had beef. Five of the 15 turkey sausages studied contained no turkey at all -- they were entirely chicken.

None of the sausages examined contained more than one other type of meat in addition to the meat the sausage was meant to contain, Hanner said, noting, however that researchers were only testing for turkey, chicken, pork, beef and horse.

"The good news is that typically beef sausages predominantly contain beef, but some of them also contain pork, so for our kosher and halal consumers, that is a bit disconcerting," Hanner said.

"The levels we're seeing aren't because the blades on a grinder aren't perfectly clean," he said, adding that many of the undeclared ingredients found in the sausages were recorded in the one-to-five per cent range.

More than one per cent of undeclared ingredients indicates a breakdown in food processing or intentional food fraud, Hanner explained.

The CFIA said Thursday that it was not surprised at the results of the study.

"We know from international intelligence that this happens and we're not immune to these things," said Aline Dimitri, the executive director of food safety science with the CFIA."Luckily when we looked at the prevalence based on that little set that we took, we are in much better shape than other countries."

The 20 per cent mislabelling rate is low compared to Europe, where studies have found 70 per cent of samples contained ingredients that were not declared.

The CFIA investigated all 20 cases of mislabelled sausages and in the case of the chicken labelled as turkey, it was able to find issues with a manufacturer's "traceability program" -- incoming meat and production records were not properly maintained, Dimitri said.

That problem was fixed, she said, but the CFIA is keeping tabs on the company. The horse meat found in one sausage couldn't be investigated because the company had voluntarily ceased operations.

Dimitri cautioned, however, that the study has limitations.

"This is a very small study and research-focused and not designed to really have a baseline on what's happening out there," she said, adding that the scientific tools used by Hanner showed promising results.

"(The tools) can actually differentiate properly between different meats, it can give us a sense of what's in there," Dimitri said.

She said the CFIA is now considering a broader study on the issue.