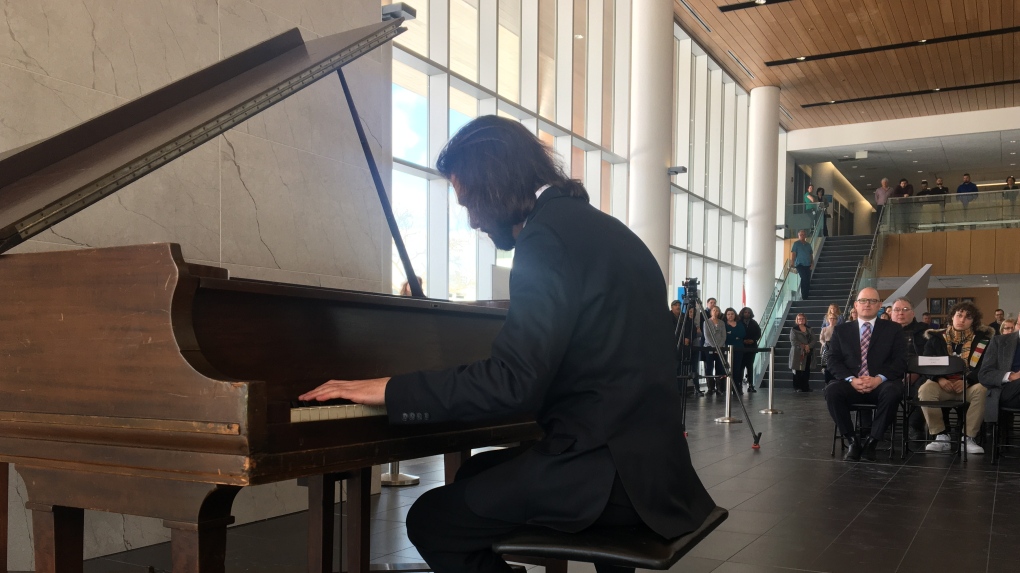 A piano bought by the grandsons of Hiram Walker is played for the first time at its new home at Windsor city hall by Samuel Blase Fedele, a Unviersity of Windsor student, on Feb. 28, 2020. (Ricardo Veneza/CTV Windsor)

WINDSOR -- Windsor’s mayor hopes an old piano with roots to the city’s past brings new life to city hall.

The first known piano recital at Windsor City Hall filled the lobby with music on Friday afternoon to inaugurate the instrument’s new home in the city building.

The piano, which was purchased by the grandsons of Hiram Walker — the founder of the Hiram Walker and Sons Distillery and Walkerville namesake — was donated to the city earlier this year.

Walker’s grandsons were founding members of Beach Grove Golf and Country Club and bought the piano to be enjoyed by the membership. The club has since found little use for the piano and wanted to find it a new home.

Windsor Mayor Drew Dilkens welcomed guests and the public to the recital at city hall on Friday.

“Well, certainly, it has lots of stories,” said Dilkens in an interview with reporters following the recital. “You lift the lid on that piano, there’s whisky stains, there’s cracks. It’s been played and it’s been well played.”

The city paid nothing for the piano except a small amount to have the piano tuned. The piano had to first sit in the city hall lobby for more than month to acclimatize to its surroundings before it could be brought into playing condition again.

University of Windsor student Samuel Blase Fedele had the honour of entertaining the crowd on Friday, playing a series of tunes including an old Hiram Walker jingle.

Dilkens hopes the young Fedele isn’t the last person with skill to hammer away at the piano’s keys.

“We want people to come into city hall and if they want to plug away on the piano, go ahead, as long as court is not in session in council chambers, they’re welcome to do that,” said Dilkens. “It’s great to have a little bit of music, a little bit of life in the lobby here of city hall.”