Officer not charged after crash between police cruiser and scooter 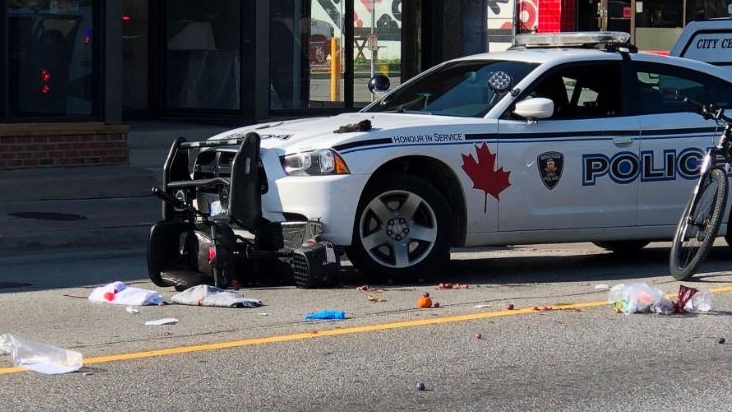 The aftermath of a collision involving a Windsor Police Service cruiser and a pedestrian on a motorized scooter in the intersection of Wyandotte St. E. and McDougall St. on Monday September 2, 2019. (Photo by AM800's Gord Bacon)

The Special Investigations Unit says a Windsor police officer will not be charged related to a crash between a cruiser and a motorized scooter.

An 87-year-old man on a scooter was hit by the marked police cruiser at the Wyandotte Street East and McDougall Street on Sept. 2, at 9:30 a.m.

The SIU says the man waited for a period of time at a red light and then proceeded into the crosswalk when the light in his direction turned green.

At the same time, a Windsor officer had started a left-hand turn, while south on McDougall intending to travel east on Wyandotte Street East.

The cruiser struck the scooter in the crosswalk.

Interim Director of the Special Investigations Unit, Joseph Martino, has determined there are no reasonable grounds to lay criminal charges against the officer related to the head injury sustained by the man.

The man’s condition was listed as serious. The involved police officer was not injured.