Non-students will be able to play videogames for free at St. Clair College's new Esports arena

Non-students will be able to play videogames for free at St. Clair College's new Esports arena

Featuring gaming consoles, virtual reality headsets, a computer lab and a stage for professional competitions, the expansion of St. Clair College's student centre has a defining focus on eSports ⁠— and you won't have to be a student to enjoy it.

The space, referred to as Nexus, was unveiled to the public Wednesday and is a state-of-the-art, Esports arena that allows anyone —whether or not they are a St. Clair College student —to play videogames or see varsity competitions up close.

The centerpiece of the arena is a stage where anyone can pop in and watch varsity players compete against other schools.

In 2016, St. Clair College became one of the first Canadian post-secondary schools to introduce Esports as both a varsity pursuit — dubbed "Saints Gaming" — and a program of study called Esports Administration and Entrepreneurship.

Recent graduate Amanda Dupuis said she has been seeing mockups of the Nexus space for the past few years — but seeing it come to life is "top notch."

"It probably would've been amazing to come in here and work with this arena — with the program."

Includes a stage for professional competitions, VR stations, couches for casual gaming and a computer lab — all available for the public to use as well.@CTVWindsor pic.twitter.com/NH2K66EdQU

While the open gaming lounge costs two dollars an hour for non-students to use, every other feature of the Nexus space is free to all.

"We don't want to turn too many people away that can't afford it. We want to make sure that everybody has the opportunity to come in here and enjoy the space," said Shaun Byrne, St. Clair College's Esports director.

According to Byrne, St. Clair College has seen the popularity of its Esports program. He added that current numbers are nearing capacity.

With the opening of the Nexus arena, Byrne believes St. Clair College can set the standard for what an Esports facility in a post-secondary school looks like.

"I anticipate that four of five years from now, we'll be listed everywhere as the inspiration for facilities opening up around Canada and even in the U.S.

Despite Dupuis graduating from St. Clair College's Esports program, she won't miss out on the opportunity to enjoy the Nexus arena. That's because she is staying back to pursue marketing at St. Clair College.

"I'll be around as a student, just helping out wherever I can — hopefully seeing what [future Esports students] make of it," said Dupuis.

The Nexus arena has been designed so Saints Gaming can play varsity games remotely against other schools, while also allowing players from other schools to walk into the space and compete in person.

Students outside St. Clair College's Esports program and varsity team can access the space starting on the first day of the fall semester. 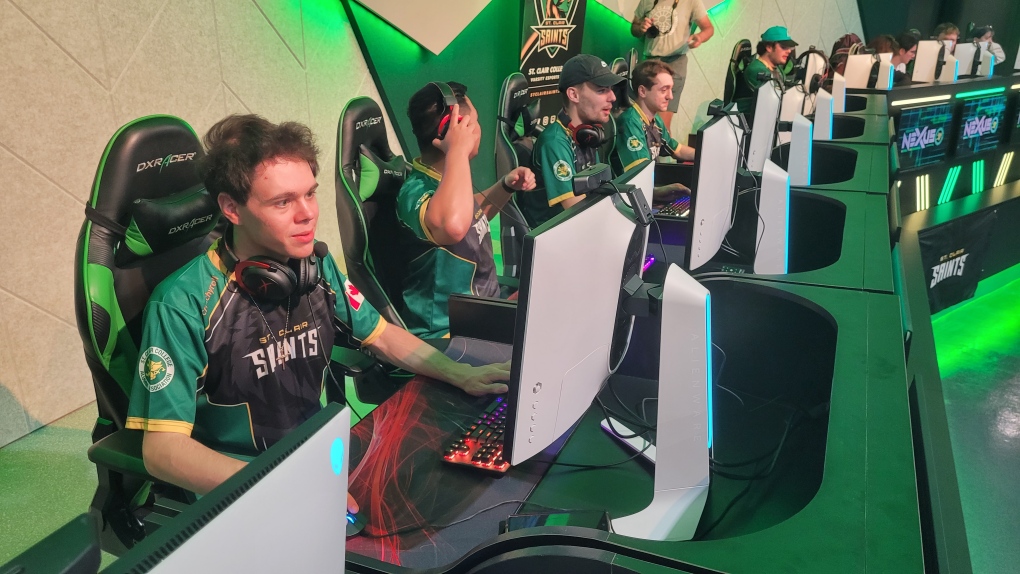 Players with St. Clair College's varsity Esports team, Saints Gaming, compete against one another in an exhibition match on Jun. 24, 2022. (Sanjay Maru/CTV News Windsor) Earlier this month, Saints Gaming's Rocket League squad was included in the Canadian national team participating in the first Esports tournament staged in conjunction with the Commonwealth Games in Birmingham, England.

During Wednesday's grand opening, the college's Student Representative Council (SRC) designated much of its student centre as The Don France Student Commons.

The naming pays tribute to the council’s general manager and executive director, Don France, for his quarter-century of mentorship of student leaders and his advocacy on behalf of all students.

The refurbishment of the Student Centre was part of the $23-million construction of the new academic tower at the college.

On top of the student centre's ground floor are two new storeys of classrooms, offices and lounge space, housing the Zekelman Schools of Business and Information Technology.

Other upgrades and expanded facilities within the Student Centre include student lounges and the college’s main open computer lab.

The facility remains the site of an assortment of Griff’s Cavern restaurant, the council’s main office and corporate boardroom and the Genesis Entrepreneurship Centre.

The building costs were split between the college’s administration and the SRC.

Radioactive capsule that fell off truck found in Australia

Authorities in Western Australia on Wednesday recovered a tiny but dangerous radioactive capsule that fell off a truck while being transported along a 1,400-kilometre Outback highway last month in what an official said was like finding the needle in the haystack.

Health Canada is encouraging Canadians to check their cupboards and kitchen tables as the agency has recalled more than 30 types of Indigo-branded items including ceramic mugs, mug ornaments and houseware products due to potential mould contamination.

Tom Brady retires, insisting this time it's for good

Tom Brady, who won a record seven Super Bowls for New England and Tampa, has announced his retirement.

An Alberta First Nation is to sign an agreement today with Ottawa giving it the autonomy to administer its child welfare.

'We're all Tyre': Family prepares to lay Nichols to rest

The family of Tyre Nichols plans to lay him to rest on Wednesday, three weeks after he died following a brutal beating by Memphis police after a traffic stop.

A suspect in a violent kidnapping in Oregon died of a self-inflicted gunshot wound Tuesday night after being taken into custody following a standoff with law enforcement, a police spokesman said.

A new report from the Heart and Stroke Foundation of Canada is highlighting 'significant inequities' in women's health care that is disproportionately affecting racialized and Indigenous women, members of the LGBTQ2S+ community and those living with low socioeconomic status.