New 'Q&A HQ' being set up for Gordie Howe bridge 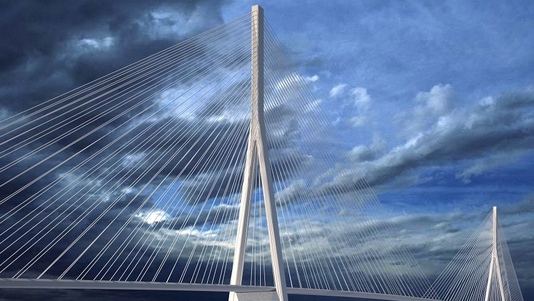 A conceptual drawing of a cable-stayed bridge, which will be the design of the new Gordie Howe International Bridge between Windsor and Detroit. (Windsor Detroit Bridge Authority)

Community members in Windsor have a more direct way of getting answers concerning the Gordie Howe International Bridge project.

It’s been sitting idle for years, but the former historic post office in Sandwich Town will be the site of a ‘Q&A’ headquarters for all things related to the new downriver bridge.

"It's good to be in the neighbourhood to hear from people and keep you posted on what we're doing," said Bryce Phillips, CEO of the Windsor-Detroit Bridge Authority.

Project leaders say although a structure can’t be seen yet sprouting from the earth, a lot is happening behind the scenes.

"Quite a bit of progress made in the last eight months or so in building, the two teams to come together as one team to get this project going," said Phillips.

A major part of the project is assembling the right workforce.

Bridging North America, the private sector partner responsible for building the bridge, has hired about 160 people so far and is currently bringing on 10 to 15 more people a month to prepare for major construction between 2021 and 2023.

The company has also achieved gender parity as 51 per cent of the workforce is female -- a trend CEO Aaron Epstein hopes to continue.

"We're pretty happy with where we are and the team we've assembled and we're confident they can take this job forward," said Epstein.

Another component of the pre-bridge build is substantial testing of elements like support shafts and also wind tunnel testing to ensure the final product can withstand the strongest of storms.

"Testing's a critical component for such a large infrastructure project and the thinking behind that is that BNA really want to get it right the first time," said Phillips.

On the U.S. side, officials report property acquisition is 99 per cent complete. Only five properties and one court date with the Maroun family remains.

"I'm highly confident we'll process through the last of it and be on our way, be 100 per cent in Michigan,” said Phillips.

The projected cost of the bridge is $5.7 billion and is expected to open in 2024.