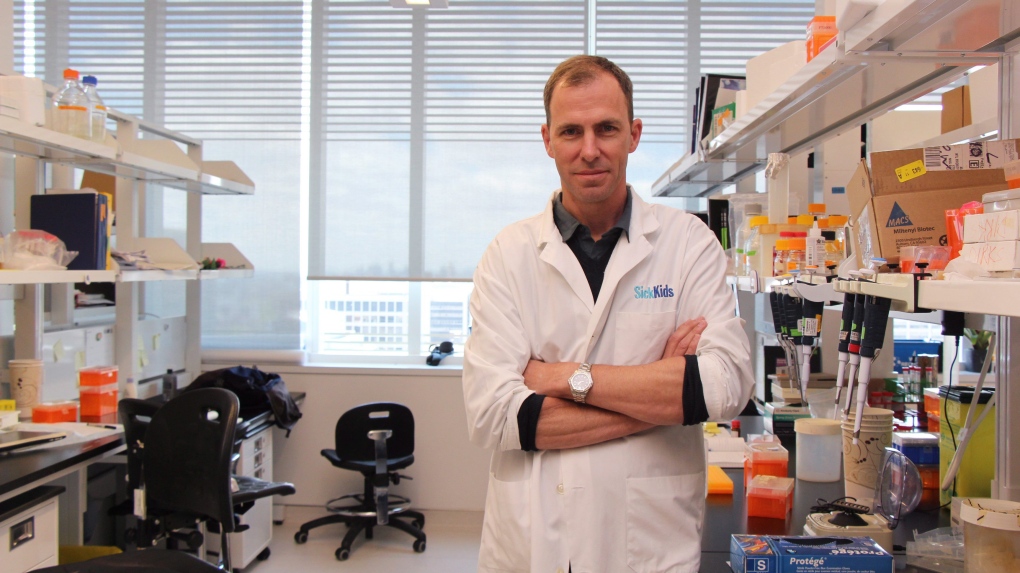 VANCOUVER -- Canadian researchers have identified genes in brain cancer stem cells that fuel the growth and survival of glioblastoma in hopes their data will be mined to develop treatments targeting an aggressive tumour that claimed the life of Tragically Hip frontman Gord Downie.

The major challenge is that even after 99 per cent of a tumour is removed, a few remaining cells multiply like tentacles and regrow in another part of the brain where further surgery is no longer an option.

Dr. Peter Dirks, principal co-investigator of a study published Tuesday in the journal Cell Reports, said despite genomic research that has led to better drug therapies for various cancers over the last decade, there's been little advancement in the treatment of glioblastoma, which has largely remained a mystery.

"It's a miserable way to go because involving your brain it robs you of your identity," said Dirks, who in 2003 discovered the existence of cancer stem cells in brain tumours and had a family member who died of glioblastoma.

"Having that happen a few years ago certainly has continued to reinforce my commitment to do the best that we can, to continue to try and push the needle forward," said the neurosurgeon and senior scientist in brain tumour research at Toronto's Hospital for Sick Children.

His research team provided 10 patients' glioblastoma stem cell cultures for an experiment using powerful genetic technology called CRISPR-Cas 9 to analyze all 20,000 genes from each of the patients' samples to determine which are important for the proliferation and growth of glioblastoma cells.

Dr. Stephane Angers, co-principal investigator of that part of the study at the University of Toronto, said the protein Cas9 is akin to a homing device that targeted certain genes important for the progression of the tumour cells.

"It's like you take all the components to make a car and put them on the sidewalk," he said of the experiment that systematically analyzed each gene. "An engineer could tell you which pieces of the engine are important to make the car move forward. Our study basically was able to identify the pieces of the engine, which are the pieces within the cells that are really important to make the tumour cell grow."

The technology could one day allow the "bad" genes to be cut out and disabled by Cas9, allowing disease-causing mutations in DNA to be replaced with new DNA sequences.

"There are about 400 genes that we found that are important for the growth and the life of these glioblastoma tumour cells and of these we need to hone in on a subset that are candidates for a new drug, and I would say 20 to 30 of them for sure," Angers said.

"We and others are now going to try and develop inhibitors, drugs, small molecules, antibodies to interrupt the function of these genes. What we're now providing the scientific community is the blue book, if you will, the instruction manual, of how our glioblastoma cancer cells are wired and what is important in their circuits for driving the growth programs."

Among the thousands of genes analyzed was one called DOT1L, which was found to be necessary for tumour persistence in seven of the 10 patients' cultures.

Dr. Samuel Weiss, at the Calgary medical school, was part of the collaboration that demonstrated the same gene is also involved in the growth of some leukemias, for which a particular drug is currently being used as a treatment.

Angers said that drug does not enter the brain well so it could not immediately be tested in glioblastoma patients though it could potentially be modified to improve its delivery to the brain and be investigated through clinical trials to determine if it would be beneficial.

Both Dirks and Angers said that while their study may point to tailored treatment in the future, they cautioned much more research remains to done to put the pieces of the glioblastoma puzzle together as researchers grapple with the disease that also took the life of New Democrat MP Paul Dewer as well as American senators John McCain and Ted Kennedy, and former vice-president Joe Biden's son Beau Biden.

The survival rate is about eight per cent over five years for the disease that every year is diagnosed in about 1,500 Canadian adults and 150 children. The average period of survival following diagnosis is about 14 months.