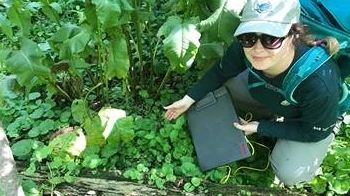 LEAMINGTON ONT -- On June 8, 2018, a small team of Point Pelee National Park’s Resource Conservation staff disembarked on the tiny Lake Erie Island whose fragile Carolinian ecosystem is one of the protected areas under the care of Parks Canada.

The team was tasked with conducting a survey of a rare and beautiful flower, the Wild Hyacinth, whose Canadian range is limited to just a few of the Lake Erie islands.

The park ecologist, Tammy Dobbie, was doing a quick survey of an area on the west side of the island, when she stumbled upon a small cluster of plants she didn’t recognize.  Tammy was puzzled. After many years of monitoring work, she considered herself familiar with the entire inventory of plant species growing on the island.

Tammy snapped a few photographs – later she would try to unravel clues to the plant’s identity back at the office, but with no luck. Without flowers, a confirmation was difficult. Later that fall, Tammy received a fateful call from botanist James Kamstra, who had visited the island later in the growing season. He had successfully identified the plant, confirming the first apparent case of its existence in Canada.

In the weeks that followed, this ominous discovery would have rippling effects through the scientific community as the implications became painfully clear.

The plant in question is Achyranthes japonica, known commonly as Japanese Chaff-flower. With the plant’s origins literally rooted in East Asia, this was a startling revelation.  How did it get here? Why is this deeply concerning to ecologists and why should Canadians take notice – and action?

Japanese Chaff-flower is an invasive perennial in the Amaranth Family and was first reported in North America in 1981 in Kentucky. Within 15 years, it had spread over 500 km along the Ohio River valley from West Virginia to Illinois, effectively covering riverbanks and displacing native flora.  It can only be speculated, but its appearance on Middle Island can likely be attributed to the dispersal of seeds by migratory birds nesting on the island – evidence to date suggests double-crested cormorants as a likely carrier.

What’s worrisome for ecologists is not only Japanese Chaff-flower’s capacity to spread and choke out native and desirable flora, but also its hardiness - it can thrive in a variety of soil conditions in six different ecological zones, giving it the potential to spread far and wide throughout Canada. TheCanadian Food Inspection Agency, Canada’s national plant protection authority, is in the process of conducting a full risk analysis of the Japanese Chaff-flower to determine the scope of its threat and a strategy to contain it.

In 2020, these efforts continued as part of the park’s Integrated Vegetation Management  Plan, which seeks to promote the persistence of a mosaic of native plant communities within the park, the species at risk that depend on them, and the natural processes that sustain them.

Wild Hyacinth is a federally-listed species at risk and endangered species that only grows on the Lake Erie Islands in Canada. With the arrival of the Japanese Chaff-flower, it now faces a new threat to its existence. Time will tell whether or not it’s possible to prevent the spread of Japanese Chaff-flower into southern Ontario and beyond. Control, research, vigilance, and eradication efforts will play a large role in its containment.

Now, more than ever, Canadians are looking for opportunities to explore the outdoors where they can safely physically distance from others. Why not join a local Field Naturalist club and find out more about Citizen Science programs happening in the community? Before venturing out on your next hike, take some time to familiarize yourself with the list of invasive species and keep an eye out for them.

Report what you see, here