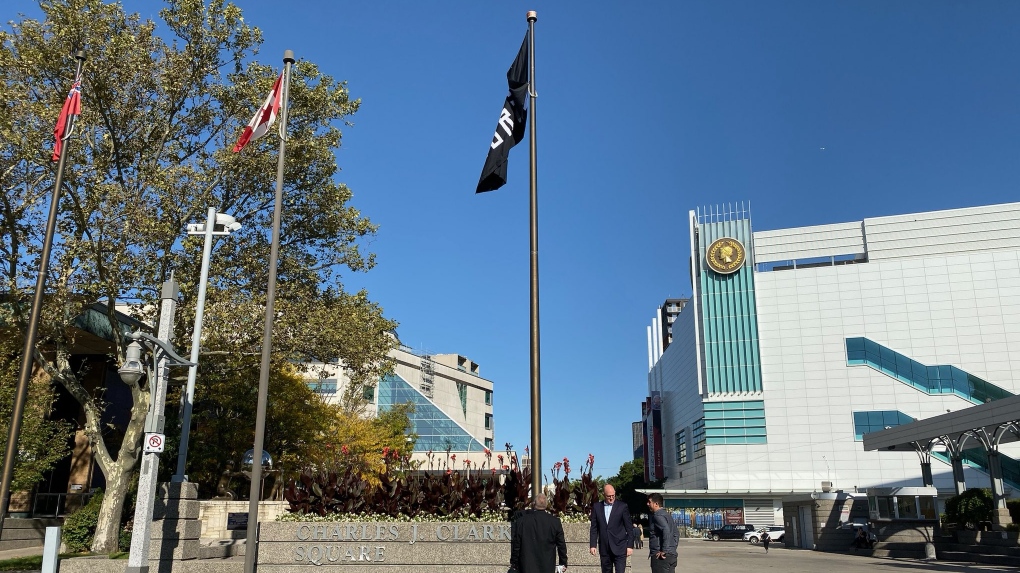 A “We The North” flag was raised by Jurassic Park Windsor organizer Renaldo Agostino and Windsor mayor Drew Dilkens at the square on Thursday, Oct. 10, 2019. (Bob Bellacicco / CTV Windsor)

WINDSOR -- The NBA Championship trophy is going on tour and will be making a stop in Windsor.

The Larry O’Brien Championship Trophy, awarded to the Toronto Raptors after winning the 2019 NBA Championship, will be at Charles Clark Square on Saturday from 10 a.m. until 6 p.m.

In preparation for the event, a “We The North” flag was raised by Jurassic Park Windsor organizer Renaldo Agostino and Windsor mayor Drew Dilkens at the square on Thursday.

The MilkUP Trophy Tour is hitting eight Ontario communities to unite and inspire fans of all ages. It launched in Ottawa on Oct. 2 and ends in Toronto on Oct. 21.

“As we launch the MilkUP youth-focused sports program with the purpose of helping youth across Ontario build a strong foundation with the right nutritional start, we wanted to inspire the youth, and dedicated fans alike, across our province and celebrate the historic playoff victory run from the Toronto Raptors,” said Sean Bredt, chief marketing and business development officer for the Dairy Farmers of Ontario.

The Raptors beat the Golden State Warriors 114-110 on June 13, becoming the first Canadian team to win the NBA title.

At every MilkUP Trophy Tour stop, fans can enter to win a pair of tickets to the Raptors home opener at Scotiabank Arena on Oct. 22, when they celebrate their championship with a banner raising and ring ceremony.

Fans can bring a proof of purchase from a milk product purchased within the last seven days of the stop, to double their chances of winning.