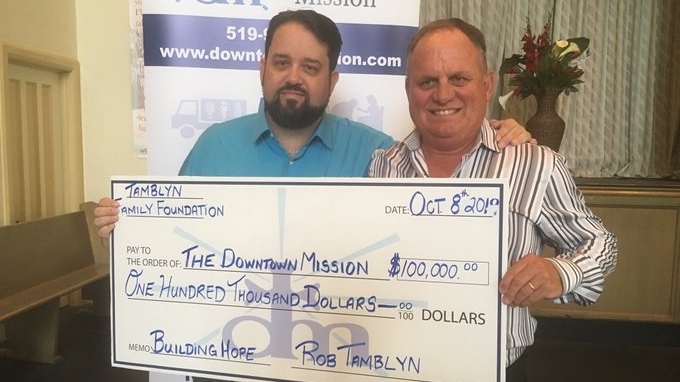 WINDSOR -- A Windsor philanthropist is asking the business community to match his donation to the Downtown Mission.

Rob Tamblyn, the president of Hub International, handed a cheque for $100,000 from the Tamblyn Family Foundation to Mission Executive Director Ron Dunn on Tuesday.

The money will support the Mission's "Building Hope Campaign."

That campaign will help turn the current Central Library's second storey into 34 housing units when the Mission gains control of the building in February.

"When you got as many successful business entrepreneurs and people that we have here in Windsor, that they rally to many causes and you can't take care of the homeless and the poor, what do you take care of?" says Tamblyn.

Dunn is appreciative of Tamblyn's donation, calling it their single largest donation to date.

"He understands the need and his support is really a vote of confidence for our project," says Dunn.

The library was forced to move to the Paul Martin building after the city sold the library branch to the Downtown Mission for $3.6 million in 2018.

The original plan was for the library to close on May 18 so the Mission could move in, but the move was delayed until 2020 to complete $1.5 million in renovations at the Paul Martin building.