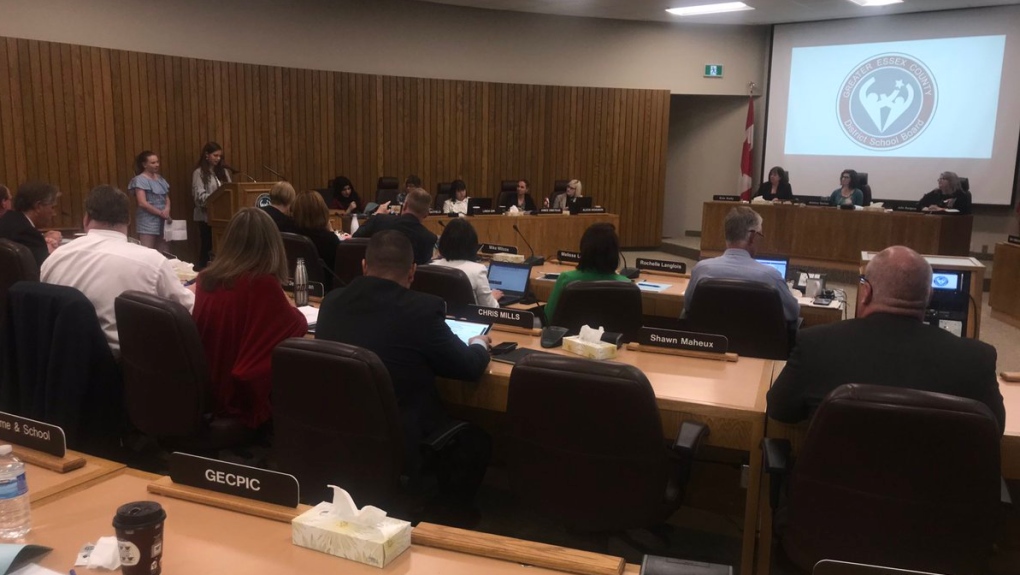 Trustees with the Greater Essex County District School Board have approved a motion to look at eliminating plastic straws and single-use plastics in Windsor, Ont., on Tuesday, May 21, 2019. (Alana Hadadean / CTV Windsor)

Trustees with the Greater Essex County District School Board have approved a motion to look at eliminating plastic straws and single-use plastics in all public schools in Windsor-Essex.

They are the same students who convinced the Town of Amherstburg to ban plastic straws and bags at the Libro Centre back in April. Walker and Aston also convinced council to review the town’s policies on plastics.

The students from Anderdon Public School in Amherstburg argue the plastics harm the environment, especially since studies show the majority of single-use plastics end up in the ocean.

“The Greater Essex County District School Board must greatly reduce and put a ban on plastics,” said Aston. “Let’s be part of the solution and not the pollution.”

Anderdon eco-teacher Jodi Nolan said she is proud of her students.

“I'm thrilled that they passed the motion to ban and really examine how they used single use plastics board wide,” said Nolan, who noted her students have helped reduce plastic bottle use at the school by 99 per cent.

Nolan also hopes the work by her students will push residents to be environmentally conscious.

“I think the challenge is to educate the public and really inspire everyone to make those changes in our own lives and we just do our best until we know better and then we all do better,” said Nolan. “The animals, nature, the wildlife, the planet, our own health depends upon it.”

A report will now be prepared to be presented to trustees in September.