Out of this world meeting: Owner of 'galaxy car' answers online plea to meet with young space fan

Out of this world meeting: Owner of 'galaxy car' answers online plea to meet with young space fan

Sophia Berlasty is still on Cloud 9 after an online plea resulted in the eight-year-old with autism getting a ride in her favourite car.

A special meet and greet was arranged this past Sunday evening to make everything happen.

“You could just see the joy as soon as she saw it,” Sophia’s mom Nicole Berlasty says.

Berlasty says her daughter lights up each time they spot the car that’s painted like an outer space galaxy driving around Windsor, most recently during the Ouellette Car Cruise.

“She saw it and she just went nuts,” she says.

Berlasty says the cruise was the first time she was prepared to take a picture of the car telling CTV News she put a plea to the owner on Facebook’s Windsor Car Spotters group, saying her daughter would love to see the “Galaxy Car” up-close once more.

Berlasty says her request was answered within minutes.

“During pandemic times it was just the nicest thing ever to see people say ‘Hey! She’s eight years old, let’s just see if we can make her smile and help her out,” she says. 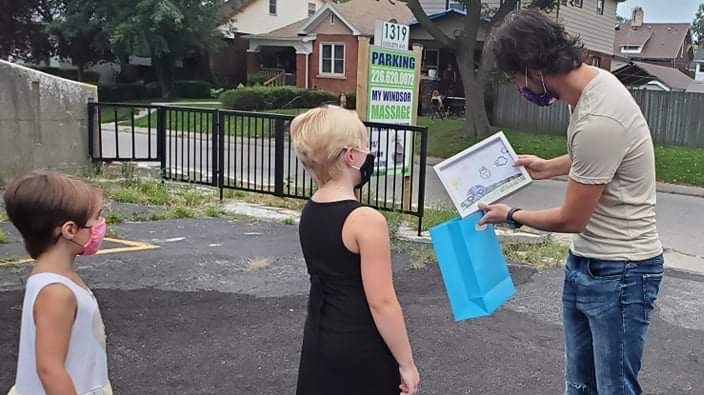 The car owner, Fadi Pota says he’s used to his Z-34 getting attention due to its size, sound and colour.

Pota brought galaxy themed gift baskets to give to Sophia and her sister, who also has autism, after learning the youngster is an aspiring space explorer.

“I just wanted to make sure that situation was particularly special,” he says.

Pota says their meeting was “meant to be” after revealing he wasn’t aware the Ouellette cruise was taking place at the same time he drove by, saying he was just going home from work, adding he had just joined the WCS online group three days earlier.

“People started tagging me saying this ‘Fadi! Fadi! This is something amazing!’ And it ended up growing into something really big,” he says.

Berlasty says she had to fight tears back Sunday evening after Pota took Sophia for a ride, saying she had been preparing Sophia all week for the meeting, not knowing what her reaction would be.”

Wonderful, wonderful guy! Went above and beyond for my children it was beautiful,” she says.

“It was amazing! Just for some guy getting tagged in a post? If that man doesn’t have children yet, one day he’s going to be an awesome dad, you can just see the good in him!”

Rescue workers and civilians passed chunks of concrete and household goods across mountains of rubble Monday, moving tons of wreckage by hand in a desperate search for survivors trapped by a devastating earthquake.

As preparations are underway for the anticipated health-care 'working meeting' between Prime Minister Justin Trudeau and Canada's premiers on Tuesday, new details are emerging about how the much-anticipated federal-provincial gathering will unfold.

The world's deadliest earthquakes since 2000

A magnitude 7.8 earthquake shook Turkiye and Syria on Monday, killing thousands of people. Here is a list of some of the world's deadliest earthquakes since 2000.

Mendicino: foreign-agent registry would need equity lens, could be part of 'tool box'

Public Safety Minister Marco Mendicino says a registry to track foreign agents operating in Canada can only be implemented in lockstep with diverse communities.

Vaccine intake higher among people who knew someone who died of COVID-19: U.S. survey

A U.S. survey found that people who had a personal connection to someone who became ill or died of COVID-19 were more likely to have received at least one shot of the vaccine compared to those who didn’t have any loved ones who had been impacted by the disease.

The chances Trudeau's health-care summit with the premiers will end with the blueprint to realistic long-term improvements are only marginally better than believing China’s balloon was simply collecting atmospheric temperatures, Don Martin writes in an exclusive column for CTVNews.ca, 'But it’s clearly time the 50-year-old dream of medicare as a Canadian birthright stopped being such a nightmare for so many patients.'