Deer shocks patrons as it smashes through Tim Hortons window 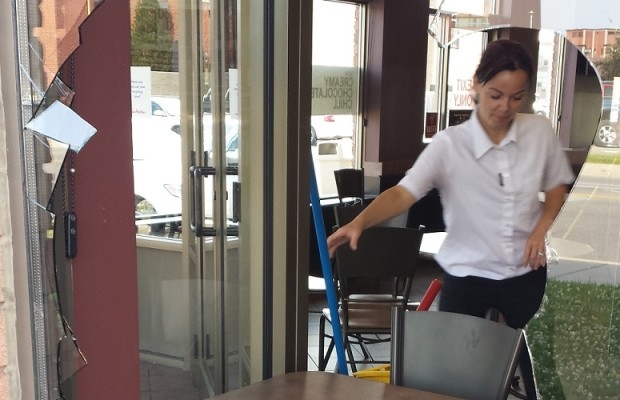 An employee cleans up after a deer crashed through a window at a Tim Hortons in Chatham, Ont., on Thursday, June 12, 2015. (Courtesy Murray Holland)

Patrons at a Chatham Tim Hortons were in shock as a deer smashed through a window this morning.

It happened at the coffee shop on Third Street around 8 a.m.

Murray Holland says he visits the coffee shop almost every morning, but he’s never seen anything like this before.

“I was sitting there looking at my phone, then bang. It sounded like a car went through the front door,” says Holland. “It just came crashing right through. It just shocked everyone.”

He says it smashed through the side window and was able to get out of the building when another patron opened the front door.

Holland says paramedics were called to tend to a man who was sitting close to where the deer broke through.

“All the glass came right  on him,” says Holland. “He was ok though.”

The restaurant was closed as workers cleaned up the glass and boarded up the window. The drive-thru window remained open all morning.

As for the deer, Holland says it appeared to be unharmed. Chatham-Kent police say it was last seen running down King Street.