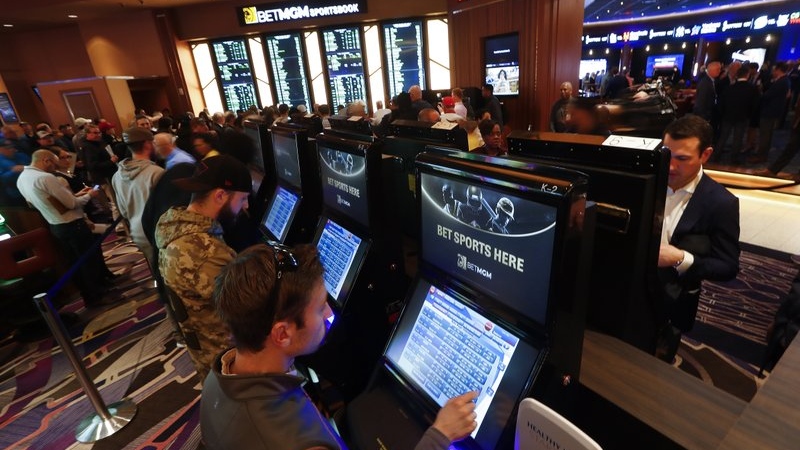 In this March 11, 2020, file photo, patrons place in person bets during the launch of legalized sports betting in Michigan at the MGM Grand Detroit casino in Detroit. (Paul Sancya/AP)

LANSING, MICH -- Online sports betting and casino games will start in Michigan at noon Friday, an expansion of options for gamblers who now wager through offshore sites.

State regulators have authorized licenses for all three Detroit casinos and seven of the dozen tribes with “Class III” casinos. Additional operator and platform provider licenses are expected to be approved in coming weeks.

Michigan Gaming Control Board Executive Director Richard Kalm this week called the launch a “new era,” saying it will give casinos an additional way to engage with customers and provide state and local governments with extra tax revenue.

Large players in the U.S. mobile gambling market such as DraftKings, FanDuel and BetMGM are launching apps and enticing people age 21 and older with deals to sign up. Big sporting events this weekend including the AFC and NFC championship games and a UFC bout featuring start Conor McGregor.

Sports and internet gambling were legalized under a law enacted more than a year ago, before the coronavirus pandemic struck. Casinos began accepting in-person sports wagers in March but had to wait for the creation of a licensing system for online operations, which have taken on increased significance amid state-ordered shutdowns or capacity restrictions at casinos to curb COVID-19.

“It’s clear to us that there’s incredible demand among Michiganders for at least sports betting. But my expectation is that online casino and in due course poker will be equally popular,” said BetMGM CEO Adam Greenblatt. His company’s app — previously launched in 10 states — is connected to MGM Resorts, including the Detroit casino and hotel.

“You’ve got a group of players who have long been betting offshore. We would like to see them bring their play back on shore,” he said. He said there will be minimal if any “cannibalization” of business from players who typically visit casinos but instead will play on the internet.

“We see an expansion of the market — so new players coming in to enjoy our product,” Greenblatt said, adding that MGM, like other casinos, will incentivize online gamblers to redeem rewards points by visiting onsite.

Casinos offering online games like blackjack will pay a tax of between 20% and 28%, depending on their amount of adjusted gross receipts. Net new annual revenues to the state and Detroit, which has commercial casinos, are projected to total $18.6 million and $13.7 million respectively, according to the Michigan Department of Treasury.

The money will go to the state’s school aid fund, which covers public schools. It also will be earmarked to a state fund that compensates first responders for lost wages and medical benefits if they get cancer from fighting fires.

Municipalities with tribal casinos will receive a portion of tax revenues, too.

“In some instances, site users may be required to spend or deposit a certain amount of money into an account before receiving their free play credits, and users should make themselves aware of such conditions so they are not taken off guard,” she said.