Mayoral candidates in Essex, Kingsville and Lakeshore participate in full day of debates

Mayoral candidates in Essex, Kingsville and Lakeshore participate in full day of debates

Mayoral candidates in Essex, Kingsville and Lakeshore squared off in back-to-back debates to make their pitch to voters less than three weeks before the municipal election.

The debates were held Thursday and hosted by the Windsor-Essex Regional Chamber of Commerce. Candidates debated topics such as collaboration with upper levels of government, transit, small business supports and housing affordability.

Three-term councillor Sherry Bondy opened her remarks by describing herself as a “boots-on-the-ground candidate” whose platform consists of strong infrastructure, community wellbeing, a relationship between council and community and smart fiscal policy.

Her opponent Richard Meloche is campaigning on promises to advocate for safe roads, expanded transit routes, an expansion of the town’s tourism strategy, relationships with housing developers and minimal tax increases which “reflect the true financial need of the town.”

When asked about the steps they would take to improve transportation in the Town of Essex, both candidates gave very different responses.

A screenshot of Essex mayoral candidates Richard Meloche and Sherry Bondy during a debate hosted by the Windsor-Essex Regional Chamber of Commerce on Thursday, Oct. 6, 2022. (Sanjay Maru/CTV News Windsor)Bondy is calling for council to hold a “strategic planning session” before accelerating forward with new transit routes in the region.

“My fellow candidate … wants to see a route go all the way down to Colchester. I know that might work for some people. But we really have to say, is it realistic? What is the cost? We have other programs in place,” said Bondy, adding residents should consider the mobility benefits of existing services.

“We have Lakeshore Community Services that runs a caravan. Perhaps, we can partner with that service to make sure our vulnerable and our seniors and anybody with special needs do have transportation.”

In response, Meloche said he would like to see the town move forward with a new transit route to Colchester.

“Based on conversations I've had with many individuals, this is something that is truly needed in the Town of Essex,” said Meloche.

“We need to look at how we can make it feasible because it's something that's truly needed.”

The two also had differing answers on what their main message would be if they had the opportunity to speak with Ontario Premier Doug Ford on the phone.

Meloche said he wanted to speak with the Premier is the need for the new acute care hospital.

“This is going to bring new doctors to our area. It's going to double the number of specialists that we have in the field of doctoring,” he said.

“We're only about 15 minutes in proximity to the new location. It will raise the level of care for the residents of the Town of Essex, both for myself, my family and my friends.”

However, Bondy said her appeal to the Premier would be for the province to “get on top of” the region’s Code Blacks.

“The provincial government needs to step up and help us here before it's too late before we have not enough ambulances out on the road and somebody's family really pays for consequences.”

Among the topics discussed is a potential transit route from Windsor to Colchester. Take a look.@CTVWindsor pic.twitter.com/9ilvnVBTrl

Lakeshore mayoral candidates Tom Bain and Tracey Bailey shared differing opinions on the municipality’s financial outlook over the next decade.

While incumbent mayor Bain is centering his platform on keeping taxes low, Bailey said Lakeshore has no plan in terms of ensuring it has the funds to pay for infrastructure and service upgrades.

The topic came up later in a discussion about the area’s sewer system which, according to incumbent mayor Bain, spiked in capacity at “surprising” levels over recent years.

“We have jumped on the bandwagon and moved forward quickly in rebuilding and increasing the size of our present sanitary plan.”

Bailey responded, saying that should not have come as a surprise.

“The money in the pot is insufficient to replace the lines in the ground. So we're going to need to be very creative. We have a large municipality. We have a small tax base with $40 million in capital work that needs to be done in 2023 that is unfunded,” she said.

“We need to be advocating for government assistance. In areas where we can, we certainly need to go after it. They're not going to come to us for it.” 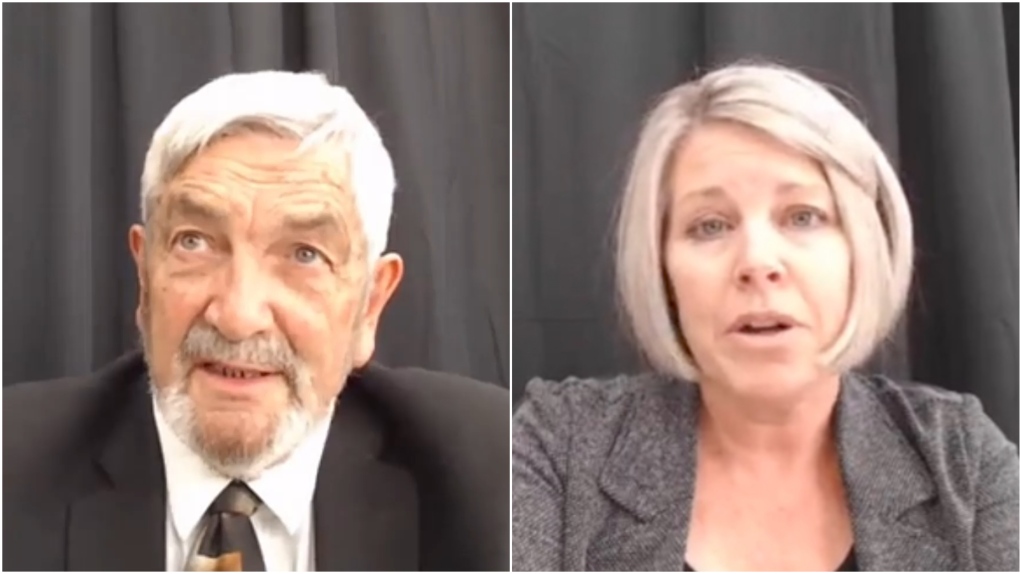 “I'd like to obviously change our policies. I'd like to change our official plan,” said Bailey, adding she would work toward creating a social and affordable housing strategy if elected.

Bain said residents have alerted him of the need for affordable housing. One solution, he added, is for Lakeshore to collaborate with other regions.

“I think we can use a county approach on this. The county has a heads-up on it already and is working on it. This is one of those areas where we can work with our neighboring municipality,” said Bain.

“So working with Essex … or with Tecumseh who adjoins us … Leamington … we can answer a lot of those questions by working together and building those complexes that are so urgently needed.”

Bain is the board chair for Invest WindsorEssex and has been Lakeshore Mayor for 16 years.

Bailey works as CEO for the Community Support Centre of Essex County and has been on Lakeshore council for eight years as a councillor and deputy mayor.

In Lakeshore, Tom Bain is campaigning on a promise to keep taxes low — but opponent Tracey Bailey says the town needs a plan so it can meet infrastructure and service needs over the next decade.

That topic came up during a discussion on Lakeshore’s sewer system.@CTVWindsor pic.twitter.com/jgApT2oIGK

As for Kingsville mayoral debate, one of the more contentious topics was how to address housing affordability.

According to Lucier, while housing in Kingsville is unaffordable, it’s also unavailable.

“This is something that, I think, we need to address with the private sector, to work with developers, to allow developers to come up with creative ideas … for smaller lots and smaller homes that can be more affordable,” said Lucier. 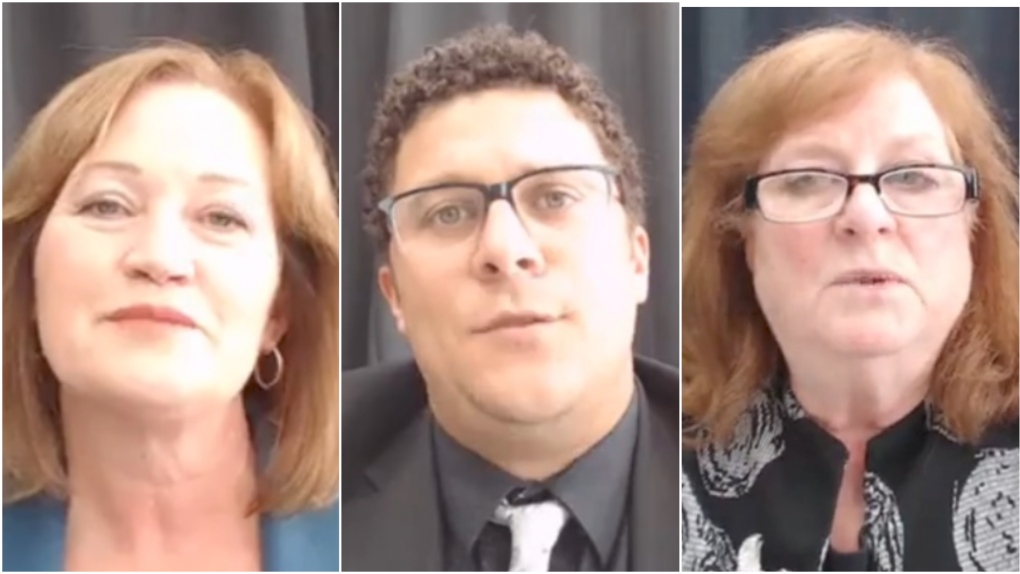 A screenshot of Kingsville mayoral candidates Laura Lucier, Dennis Rogers and Tamara Stomp during a debate hosted by the Windsor-Essex Regional Chamber of Commerce on Thursday, Oct. 6, 2022. (Sanjay Maru/CTV News Windsor)For Stomp, the issue of housing affordability is beyond the scope of the town but there are steps Kingsville council can take.

“That is the real key when we put up apartment buildings so that people can afford to live in that because they can't buy a home and they need to pay rent. They don't have to go out of Kingsville to do that.

But, accordion to Rogers, existing data on housing affordability is being untapped by Kingsville.

“We have a 2018 affordable housing study, which names the KPS and KTHS properties, and they haven't been updated. The first thing we have to do is we have to update it,” said Rogers.

“I'm not going to have the taxpayer reach into their pocket to come up with new ideas and new solutions when we've paid for a study that can have some data that can help us now.”

The full videos of all three debates can be viewed on the Windsor-Essex Chamber of Commerce's YouTube channel. The municipal election is Oct. 24.

MPs are marking the 33rd anniversary of the École Polytechnique de Montreal shooting that left 14 women dead, while debate over the Liberal government’s gun control legislation — including which specific firearms should be restricted — is ongoing.