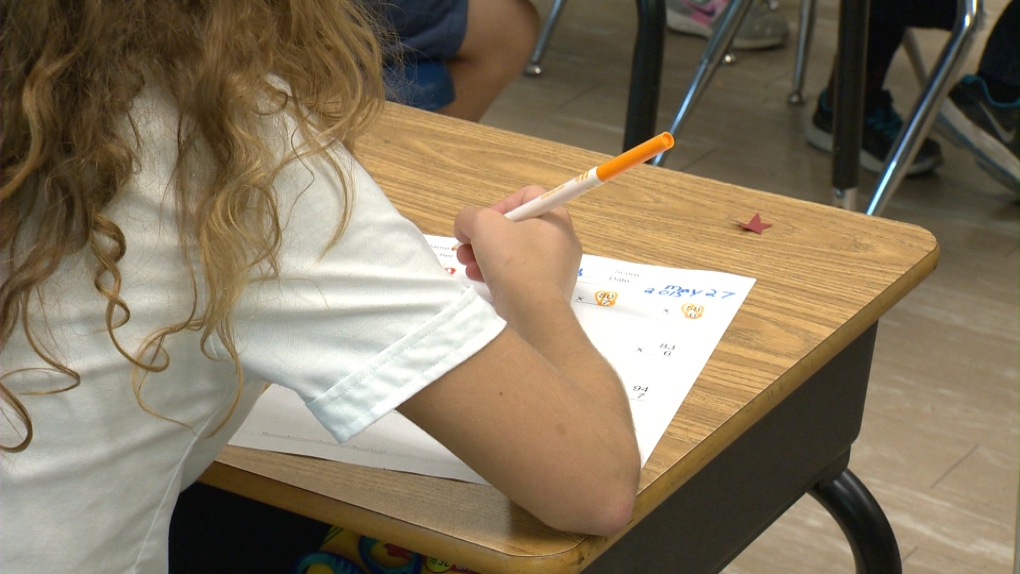 A student is seen completing a math assignment in this undated file image.

TORONTO -- Math test scores among public elementary students in Ontario have been decreasing over the last five years, indicating government efforts to reverse the trend have not worked, according to the agency administering standardized assessments in the province.

In its annual report released Wednesday, the Education Quality and Accountability Office said the strategy implemented by the previous Liberal regime appears to have failed.

"Math and literacy are the foundation for the knowledge and skills that students will use in their careers and in society," EQAO chair Dave Cooke said in a statement. "The continued decline in elementary-level math scores suggests that Ontario's Renewed Math Strategy is not having the intended impact."

Meanwhile, 45 per cent of Grade 9 students enrolled in the applied math course met the standard, while that figure stood at 84 for those in the academic math course. Academic courses focus more on abstract applications of concepts, while applied courses focus on the practical.

The ministry has released a new teacher's guide and parent fact sheet to help educators and parents focus on "traditional formulas and memorization techniques," Thompson added.

"The previous government used our children's classrooms to test a failed experimental curriculum called 'Discovery Math,"' she said in a statement. "Our government has already made changes to bring back proven methods of teaching that work."

Premier Doug Ford had promised during the spring election to scrap the "discovery math" curriculum and return to basics.

Discovery math does not focus on memorization of math problems that were traditionally taught in the classroom. Instead, it encourages students to engage in problem-solving that grounds math in its application.

Mary Reid, an associate professor at the University of Toronto's Ontario Institute for Studies in Education, said if the Progressive Conservative government changes the current math curriculum, it should retain at least some of discovery math's problem-solving and conceptual lessons.

Memorization in math class will only get a student so far, children must know the concepts behind mathematics, she added.

"We really need to bring the pendulum back to the middle and ensure that we have a balanced approach so that our students have strong computation fluency and good problem solving," she said. "We can't throw out the problem-solving because that is, in essence, what mathematicians do."

The three-year plan put an average of 60 minutes per day of "protected math learning time" in the curriculum for Grades 1 through 8. It also designated up to three "math lead teachers" in all elementary schools and a dedicated math professional development day.

Of the over 122,000 high school students who took the Ontario Secondary School Literacy Test, 79 per cent were successful. But that figure was a decrease from 83 per cent in 2014.

"EQAO has been highlighting the decline in OSSLT achievement and the broadening gap between secondary-level students in the applied and academic courses for several years," EQAO CEO Norah Marsh said." This trend is cause for concern and should be further examined."