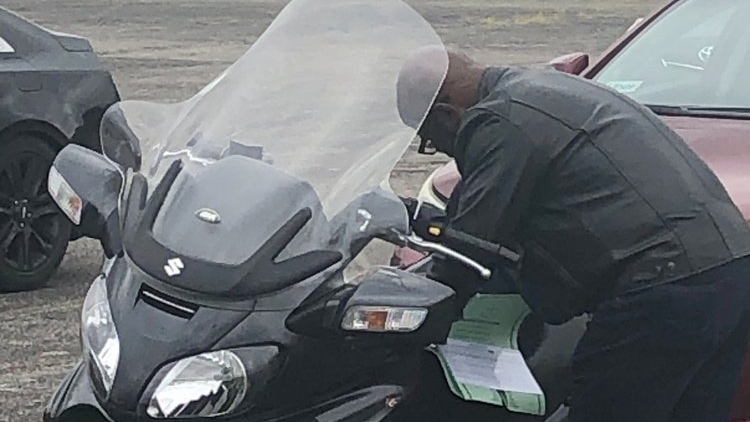 Gregory Wilson fills out his ballot Tuesday, August 4, 2020 on the seat of his motorcycle at New Providence Baptist Church in Detroit. (AP Photo/Corey Williams)

NOVI, MICH -- Roughly 1.6 million Michigan voters cast absentee ballots, but there were still those who braved the coronavirus threat Tuesday and voted in person during the state’s primary election.

Among them was Irma Ramirez, a 73-year-old from Novi who cast her ballot at the Detroit suburb’s Civic Center complex.

“I wanted to make sure that my voice was heard,” Ramirez said after she voted.

The primary features several races in which nominees will be chosen to vie in November’s election for seats in the U.S. House and the Legislature. With the coronavirus pandemic still raging, the primary election was marked by a surge of mail-in absentee ballots.

Uyoung Suggs, a 40-year-old from Novi, said she voted in person on Tuesday because she lost track of time and didn’t request a mail-in ballot by the deadline. She said she felt safe while voting.

“There was social distancing in place. They made sure all the pens were sanitized, I noticed,” she said.

Chris Gantz drove to New Providence Baptist Church in Detroit expecting to walk in and cast her ballot. Then she learned it was one of two drive-thru voting locations the city was using to ease voter concerns about the coronavirus. Gantz filled out her ballot in the front seat of a van.

“This works for me,” she said. “It seems like it’s a lot easier and less complicated than waiting in line and going to the tables and getting your ballots.”

Turnout at the church appeared light on Tuesday morning for people going inside to vote. Drive-thru voting was even lighter.

Gregory Wilson, 64, filled out his ballot on the seat of his motorcycle.

“I simply felt as though it was safer,” Wilson said of voting from the parking lot instead of going inside the church. “I didn’t know how many people would be on the inside. I take the social distancing seriously.”

“Our polling places were calm, clean and safe,” Secretary of State Jocelyn Benson said. “We did not see or hear any accounts of crowding at precincts, long lines at precincts, people waiting for hours and into the night.”

Benson predicted it “may be well” into Wednesday until all race results are known because of the absentee ballots.

The state provided some election workers in parts of the state that needed help, said Jake Rollow, spokesman at the Department of State, which oversees elections.

“The plan was to recruit as many workers as we could to meet clerks’ needs,” he said.

More than 50 were sent to Detroit, where some election workers showed up late or didn’t show up at all, Rollow said.