Man loses job after asking for marijuana via Twitter 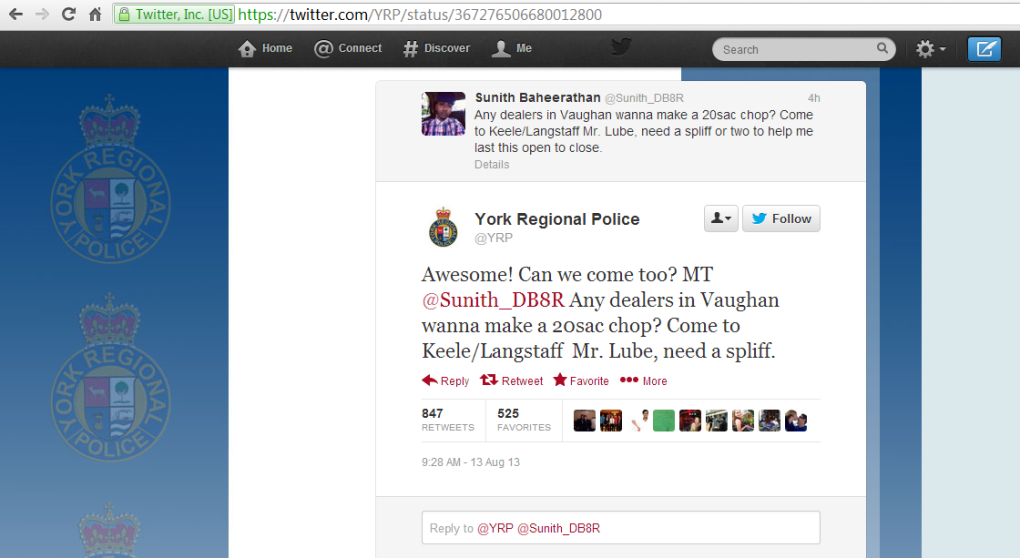 A man has lost his job after posting a tweet asking for drug dealers to bring him marijuana. (Twitter)

TORONTO -- An online search for marijuana has turned into a job hunt for one Canadian Twitter user.

Sunith Baheerathan caused an online stir when he issued a tweet requesting prospective pot sellers to bring some of their wares to a Mr. Lube location in a Toronto suburb.

Baheerathan first raised eyebrows when he expressed his workplace craving in a public tweet and appealed directly to those who may be able to satisfy it.

"Any dealers in Vaughan wanna make a 20sac chop? Come to Keele/Langstaff Mr. Lube, need a spliff," he wrote.

But the tweet soon turned into a viral sensation when it caught the attention of local police, who lost no time in contributing to the online chatter.

"Awesome! Can we come too?" read the retort from the York Regional Police's official twitter feed.

Moments later the twitter exchange was a trending topic in Toronto. Shortly after that, Baheerathan found himself looking for work.

"Just got the call of termination," he tweeted to a friend.

An employer at the Mr. Lube location mentioned in Baheerathan's controversial tweet, who would not share his name, confirmed that Baheerathan had been fired yesterday but would not say whether his dismissal was related to his online activities.

Phone calls to the head office of Mr. Lube in British Columbia were not immediately returned.

Baheerathan responded to an interview request by retweeting it to his followers alongside several messages expressing consternation at his firing.

"I've lost complete hope in society man. There's killers/rapists/people missing and all they care about is a dude asking for weed," he wrote in one tweet.

"Gotta watch what you tweet nowadays, even the freedom of speech & the right to an entitled opinion isn't safe," read another.

Social media consultant Amber MacArthur doesn't believe freedom of speech has much to do with the issue.

Companies are unlikely to look kindly on any employee that brings them unwanted attention, she said, adding canvassing illegal activity on Twitter is one of the most basic breaches of corporate online etiquette.

"There is that perception that employees can be free to say whatever they want, but the reality is an employer does have the right to dismiss an employee if the employee has connected their name with some kind of activity . . . that doesn't reflect well on them, and this is a perfect example of that," she said.