There was a hive of activity Wednesday at a downtown Windsor bus shelter that had been swarmed by bees.

About 4,000 honeybees were congregating inside the shelter on Wyandotte Street and Ouellette Avenue, next to Shoppers Drug Mart.

Purdie Good Honey from LaSalle was there Wednesday morning to remove the pollinators.

Tim Purdie said this was the first time they dealt with a swarm in downtown Windsor, saying it was an exciting opportunity to come rescue the bees for the Essex County Beekeepers Association. 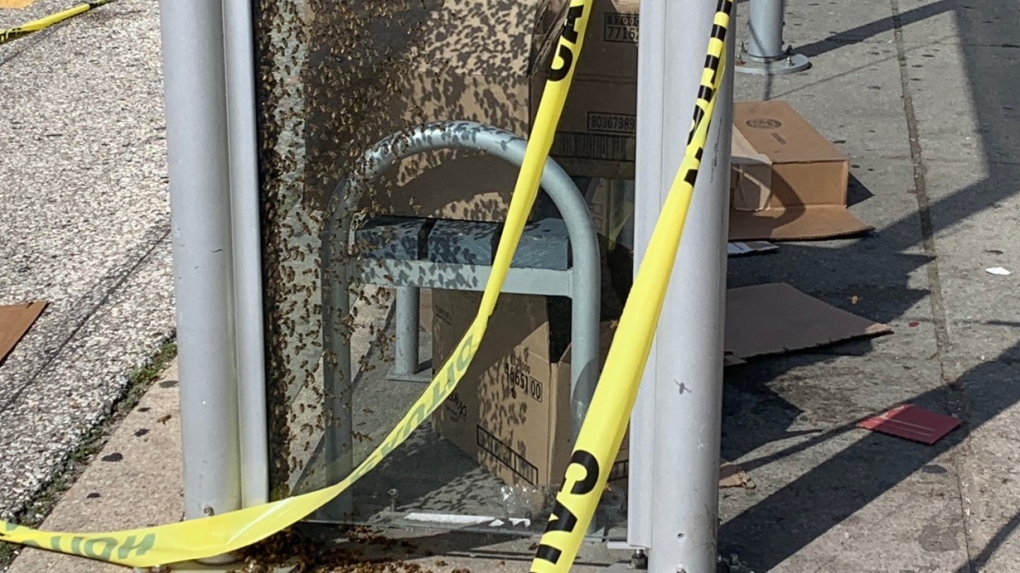 Bees are swarming the shelter on Wyandotte and Ouellette in Windsor, Ont., on Wednesday, June 15, 2022. (Bob Bellacicco/CTV News Windsor)“Usually bees are hanging off trees and whatnot in nature and they're on their way,” Purdie said. “They seem very healthy and anxious to get them back to the bee yard and get them checked out. Make sure they're healthy and put them in a bigger location where they can forage and prosper.”

Purdie and his daughter, Drew, spent the entire morning carefully removing the bees to eventually be relocated to their LaSalle property to make honey and wax.

“A full-size colony is between 10 and 20,000 bees,” Purdie said. “So this is early in the season. They'll grow into the fall period and they'll shrink down a little bit overwinter and then be off to the races again for spring.”

Purdie suspected the swarm stopped at the downtown bus shelter to rest since it’s protected from the elements. He said he thought the former colony may have been too crowded and too hot. 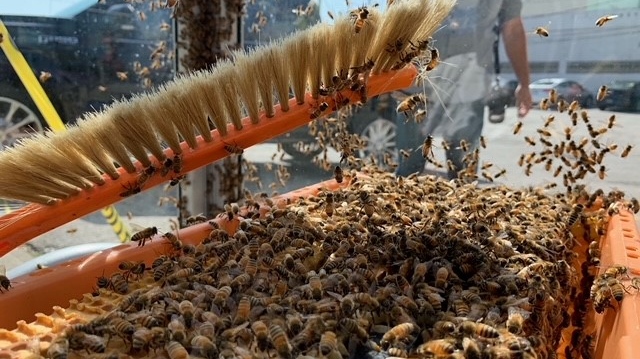 Bees are collected at a downtown bus shelter in Windsor, Ont., on Wednesday, June 15, 2022. (Chris Campbell / CTV Windsor)“A swarm leaves an existing facility that's either too small or under threat,” Purdie said. “And so they divide naturally. It's like procreation, and they've rested here on their way to find a permanent better home and we've just intercepted them.”

The beekeeper continued, “They would have left within a couple of days if everyone left them alone. They would have found another spot but the danger of that is that they might take up residence in someone's roof or inside their siding or something that's undesirable in this way we capture them, put them in a suitable home out in farmland in LaSalle.”

There were no stings from the downtown horde reported.

The apiarist noted most bees remain docile when in a swarm like this.

“Bees when they're in the swarm condition are full of honey. So it's like overeating,” Purdie explained. “You really are not motivated to go attack anybody when you're nice and full. You just want to go find a nice place to rest and nap.”

A fire ripped through a packed Coptic Orthodox church during morning services in Egypt's capital on Sunday, quickly filling it with thick black smoke and killing 41 worshippers, including at least 10 children. Fourteen people were injured.

Republicans stepped up calls on Sunday for the release of an FBI affidavit showing the underlying justification for its seizure of documents at former President Donald Trump's Mar-a-Lago home.

Weapon in deadly 'Rust' film set shooting could not be fired without pulling the trigger, FBI forensic testing finds

FBI testing of the gun used in the fatal shooting on the movie set of 'Rust' found that the weapon handled by actor Alec Baldwin could not be fired without pulling the trigger while the gun was cocked, according to a newly released forensics report.

'Fanaticism is a danger to free expression everywhere': Ignatieff on Rushdie attack

After Indian-born British novelist Salman Rushdie was attacked during a writing conference in western New York on Friday, current and former Canadian politicians are weighing in on what such attacks mean for freedom of expression and thought.

Salman Rushdie 'on the road to recovery,' agent says

Salman Rushdie is 'on the road to recovery,' his agent confirmed Sunday, two days after the author of 'The Satanic Verses' suffered serious injuries in a stabbing at a lecture in upstate New York.

Norway puts down Freya the walrus that drew Oslo crowds

Authorities in Norway said Sunday they have euthanized a walrus that had drawn crowds of spectators in the Oslo Fjord after concluding that it posed a risk to humans.