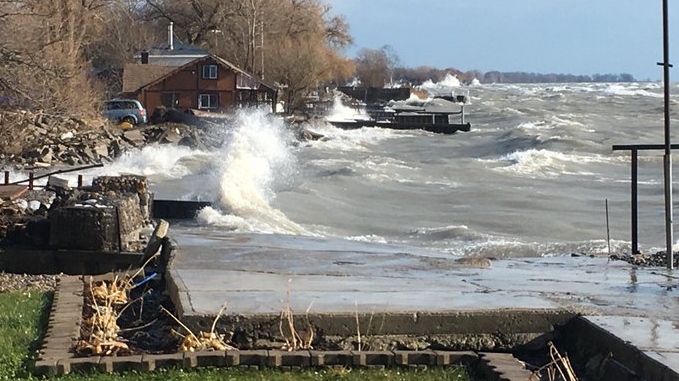 WINDSOR, ONT. -- Politicians from upper levels of government are appealing for more funding to repair the Erie Shore Drive dike as construction is underway.

“Their strategy seems to be well we’ve studied it. We know flooding is a problem but we’re not going to do anything about it. In fact their flood strategy doesn’t come with one single nickel of funding,” said Percy Hatfield, MPP for Windsor-Tecumseh.

Members of the Conservative Ontario Caucus also raised their concern by sending a letter to the office of Prime Minister Justin Trudeau to address the growing rising water levels and flood risks in Ontario communities.

“Parliamentarians and Canadians have not received any information from your government yet on the measures for mitigation and the state of preparedness,” stated the letter. “We believe it is essential for the federal government to have a fully detailed plan to prepare for what is likely the risk of flooding this spring.”

Erie Shore Drive has been in a state of emergency since Feb. 28 following fears of a major breach. As of Monday, the road was closed as construction began in efforts to secure the dike.

This work we’re doing now is strictly temporary, six to eight weeks and then we’ll have to figure out what we’re doing long term,” said Trevor Thompson, Chatham-Kent Ward 2 councillor.

As for the long term plan, Thompson said it’s too early to have any concrete solutions set but believes expropriation needs to be an option that remains on the table.

"In April, we expect to see some sort of plan to come back to council that could potentially look at either a large scale expropriation or buy out package or all the way down to absolutely none,” said Thompson.

He said ultimately it comes down to the funding available.

He hopes more funding will be made available as the provincial and federal budget are set to be tabled by the end of the month.