Lev Tahor teens on hunger strike according to sect officials

After being transported back to Canada from Trinidad and Tobago, two Lev Tahor girls are on a hunger strike according to sect officials.

In an email to CTV Windsor, Miriam Helbrans says a 16-year-old and a 14-year-old have been on a hunger strike since Saturday afternoon. The two are protesting actions taken by Children’s Aid Society workers that are preventing them from being with their parents.

The two were part of a group of six children that were placed in the care of child services, after Lev Tahor members landed at Toronto’s Pearson International Airport Saturday night.

Helbrans says the 16-year-old has been taken to SickKids Hospital, where “the doctors are fighting for her life.”

“The message from the Canadian government to the world is Lev Tahor kids are wanted alive or dead.”

Calgary Police confirm that officers assisted officials with Chatham-Kent Children’s Services in apprehending a 17-year-old female and her five-month-old daughter as they stepped off a flight at Calgary International Airport. They arrived at the airport at 3:30 p.m. local time Sunday, but it remains unclear where they had travelled from.

The pair remains in the custody of children’s services. They were to be flown back to Ontario, police said, and were expected to arrive at Toronto’s Pearson International Airport late Sunday.

With files from CTV Calgary 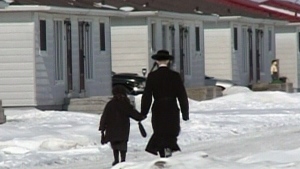