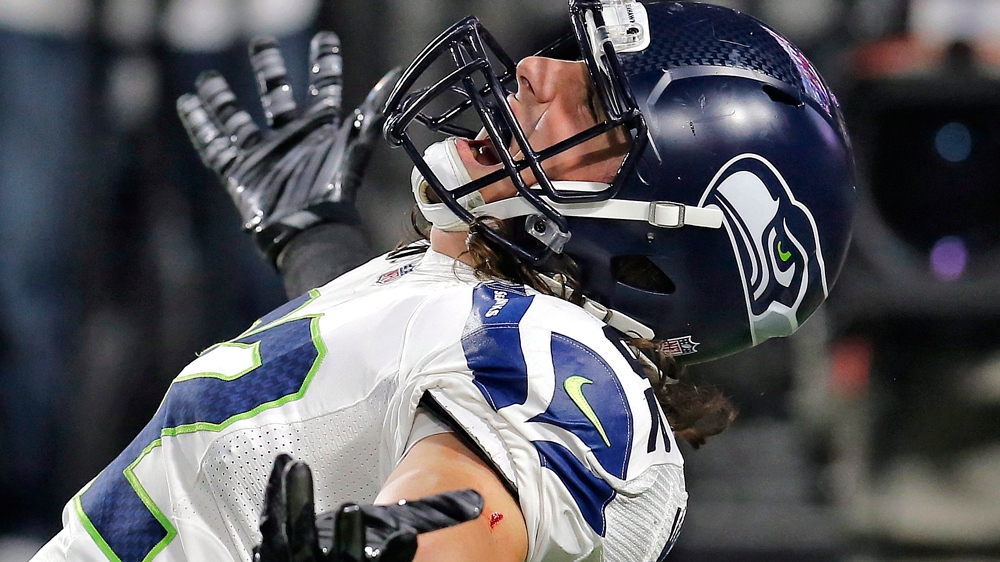 Seattle Seahawks tight end Luke Willson celebreats his touchdown during the first half of an NFL football game against the Arizona Cardinals, Sunday, Dec. 21, 2014, in Glendale, Ariz. (AP / Rick Scuteri)

Luke Willson has experienced the best, and worst, of playing in the Super Bowl.

The Canadian experienced the thrill of winning the Lombardi Trophy in 2014 as a rookie tight end when the Seattle Seahawks dispatched the Denver Broncos 43-8. But then came the exasperation of a controversial 28-24 loss the following year to the New England Patriots.

The personable 30-year-old native of LaSalle, says there's no bigger high -- or more bitter disappointment -- in football than winning or losing the Super Bowl.

"I don't think so," Willson said this week during a telephone interview. "The year we won it, we started out hot (11-1 en route to a 13-3 record) and felt like we had a pretty good team so it was kind of in the back of everyone's mind.

"When we finally got to that moment where we did win, it was just pure jubilation. And it was just the polar opposite the next year."

Willson and Regina native Jon Ryan, who was Seattle's punter in both Super Bowl appearances, were the last of 15 Canadian-born players to participate in the game, according to NFL Canada. That drought will end Sunday when the Kansas City Chiefs face the San Francisco 49ers. Laurent Duvernay-Tardif, from Mont-Sainte-Hilaire, Que., will start at right tackle for the Chiefs.

Sophomore Ryan Hunter, a native of North Bay, Ont., is also on Kansas City's 53-man roster and listed as Duvernay-Tardif's backup. But he wasn't active in the Chiefs' 35-24 AFC championship game win over Tennessee.

Trailing 28-24 in the 2015 Super Bowl, Seattle drove to the New England one-yard line with 26 seconds remaining. But rather than hand off to rugged running back Marshawn Lynch, Seahawks quarterback Russell Wilson threw a pass that was intercepted by Malcolm Butler to preserve the Patriots' victory.

Afterward, the six-foot-five, 255-pound Luke Willson was one of many Seahawks to say they would've given Lynch the ball rather than pass. It's a sentiment Willson maintains today.

"Yeah, I think everybody does," he said. "To be honest, I don't know if any of us will truly move on.

"It's something that happened and you've just got to go from there."

Willson is attending Super Bowl festivities in Miami. He's working as an analyst with TSN while recovering from minor post-season surgery to deal with a bone spur in his right shoulder.

This was Willson's seventh NFL season, and sixth with Seattle. He rejoined the club in September after being among the Oakland Raiders' final training-camp cuts. After spending his first five campaigns with the Seahawks, Willson signed as a free agent with the Detroit Lions in 2018.

Willson is slated to become a free agent again this off-season but is hopeful about remaining with Seattle. The Seahawks (11-5) finished second in the NFC West, then beat Philadelphia 17-9 in the wild-card round before losing 28-23 to Green Bay in the divisional playoffs.

"What was tough about the season was I thought we were pretty special as a unit," Willson said. "We would've liked to get a shot at the 49ers . . . but I love Seattle, I love the Seahawks and to play another year there I really cherished it.

"It (being a free agent) isn't most the enjoyable situation but at this point I'm getting a little used to it so I really don't have any complaints. Hopefully it's back to Seattle but if not, I'll make wherever it is home."

While the Super Bowl victory ranks as a career highlight for Willson, he said there was precious little time to fully appreciate the feat.

"You have to go back to do all the exit checklists, participate in the parade and kind of get your life back in order," Willson said. "You're kind of in mid-February and you've really only got two months until you're back at it in April (for mini camp).

"That might sound like a lot of time but when it comes to a training program to clean up injuries or deficiencies the year might've created. it's not much. That makes it difficult to sit back and enjoy the victory but hopefully I'll have many years after I'm done playing to do that."

Willson wants to continue playing in 2020, be it with Seattle or another NFL squad, but that's as far ahead as he's looking.

"It's more one year at a time and examine how the body feels," he said. "Right now I'm feeling great so I'm hoping to definitely play next season and go from there."

While the past seven years have flown by, Wilson said the often brutal business of pro football hasn't diminished his love for the game.

"I haven't really changed since I started playing," he said. "I think I appreciate (football) much more now than I did back then.

"Yeah, it does seem like it's gone by pretty quick but I think it's another one of those things I'll be able to reflect on it when I'm done. Right now it's keep playing, let's get a squad. Hopefully it's Seattle and keep trying to improve."

Regardless of where his football future lies, Willson will always have the distinction of having been a Super Bowl champion.

"There's no doubt about that," he said. "Even as a kid growing up and watching the Super Bowl every year and thinking now, 'Hey, I've played in a couple of these and was fortunate enough to win one.'

"Again, it's something when I'm done playing I'll be able to reflect on and be pretty proud of."

According to NFL Canada, 15 Canadian-born players have played in the Super Bowl. Here is the list:

Others players to have grown up in Canada and play in the Super Bowl include:

This report by The Canadian Press was first published Jan. 28, 2020.