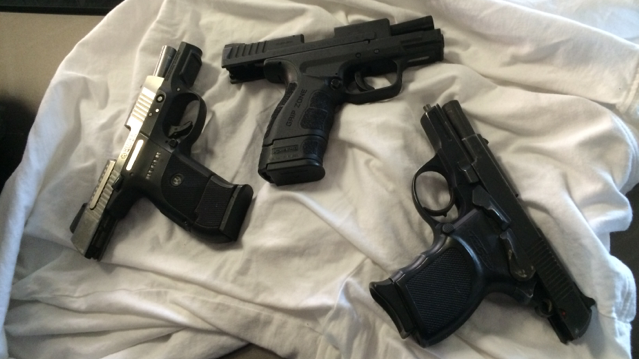 A Brampton man has been sentenced by a Windsor judge for illegal weapons offences caught during a cross border investigation.

Philip Nkrumah, 34, was sentenced to 501 days in prison on Monday and 18 months’ probation.

Justice Bruce Thomas levelled an original sentence of three years and three months, but provided credit for serving 429 days of pre-sentence custody and another 240 days of credit for his house arrest.

Nkrumah pleaded guilty in March to conspiring to trafficking firearms, trafficking an illegal weapon and possession of cash obtained from crime.

He was arrested as part of a cross-border, multi-agency investigation into illegal drug and weapons smuggling in Essex County.

Justice Thomas told the court Nkrumah’s offence is significant and the court must react meaningfully, noting the focus of Nkrumah’s sentence will be on denunciation and deterrence as well as the protection of the public.

Prior to sentencing, Nkrumah addressed the court, noting he accepted full responsibility for the crime. “I’m truly sorry for what I’ve done and I’ve taken steps to put it behind me.”

“I’m 34. I’ve been on house arrest… it’s not good for my family,” Nkrumah continued. “This is not my character. This is a first time, first and last time for me. It will never happen again.”

Nkrumah’s defence lawyer, Maria Carroccia said the sentence falls within the case law and her client is ready to serve his time.

“He's prepared to deal with the sentence. He wants to move on,” Carroccia said. “He started to turn his life around as much as he could while he was on bail, but he just wants to move forward, and put this behind him.”

In March of 2016, 10 people were charged with a combined 111 offences through Project Kirby.

Court heard between Jan. 7, 2016 and Jan. 13, 2016, Nkrumah met at least twice with undercover officers to either discuss or complete the sale of an illegal handgun.