'It was unbelievable!' Crash through two backyards renews calls for traffic calming

'It was unbelievable!' Crash through two backyards renews calls for traffic calming

An early morning collision over the weekend has renewed calls for strengthened traffic calming measures with neighbours on Bayswater Crescent fearful for their safety.

Adriana Crisan said she awoke early Sunday morning to discover a vehicle veered from McHugh Street near the entrance of The WFCU Centre, into her backyard, destroying the fence and trees, along with a backyard swing.

“I have grandkids that are playing here all the time,” said Crisan. “When they come over, we just play in that corner. That's their favourite corner. So I don't even want to think about what would have happened.”

Crisan explained she’s lost sleep since the crash, noting it’s not the first time concerns have been raised.

“I know before we kept calling the police and the city to do something about the street,” she said.

“It's a four-lane street and people tend to speed here and do donuts and all kinds of stunt driving, day or night it doesn't matter. Hopefully, now somebody's going do something about it because this is not safe.” 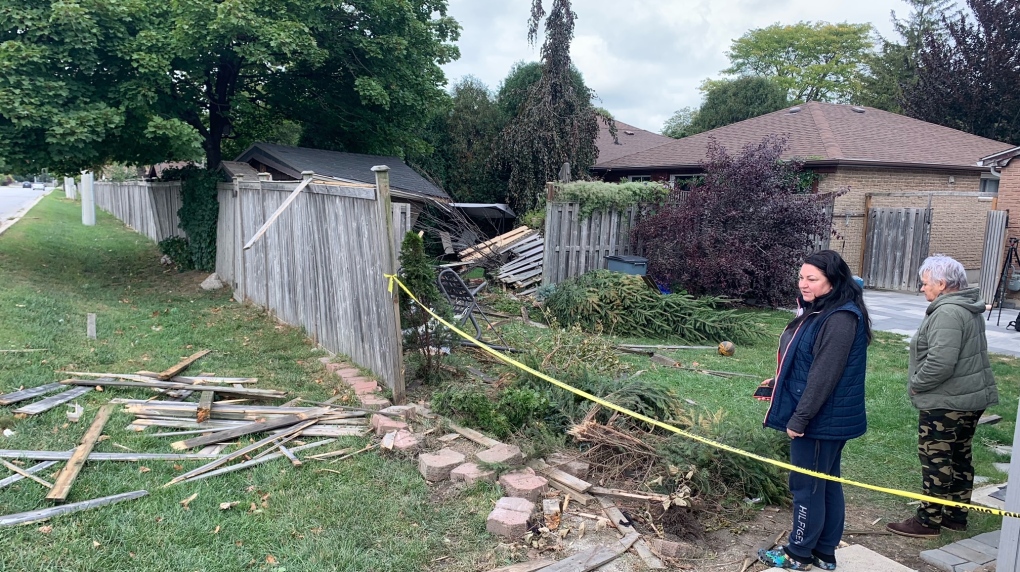 Residents are calling for traffic calming measures after a car crashed through the fence of two houses in Windsor, Ont. pictured on Tuesday, Sept. 27, 2022. (Chris Campbell/CTV News Windsor)Windsor police said officers responded to a report of a single motor vehicle collision around 7:30 a.m. Sunday after a vehicle had left the road and crashed through the fence of two residential homes.

“I heard the big bang but so huge I thought ‘oh my Lord, what happened something came down from the sky or what happened!’”

Police said the driver was not injured, remained on scene and was issued a ticket for careless driving, noting no other injuries were reported.

Kurucz told CTV News the impact of the crash caused major damage to her property including the shed and fence, explaining that family and friends had just gathered the night before for an end-of-summer celebration in the same spot.

“All night every night the cars are speeding here, Kurucz said. “They have to do something here.”

Earlier this year, the city launched a traffic calming survey to help slow vehicles down in necessary areas. It aims to streamline the process of installing speed humps.

Chief building official John Revell said the rollout in residential neighbourhoods has ramped up in progress but notes it doesn’t apply to larger connector roads, like McHugh Street.

“We've got a very comprehensive traffic calming policy with a whole toolkit of different measures we can take a look at now,” Revell said.

“The tools that we use for local streets cannot be used on collector roads. You can actually make the situation worse.”

He said various neighbourhoods continue to be surveyed saying it’s based on best practices from other regions in the province.

“They look for areas where there are issues and if they're noticing trends they will up their presence and try to remind drivers or issue tickets even if necessary,” he said.

Windsor police const. Natalya Natyshak said officers want drivers to slow down, suggesting the change in weather should serve as a reminder.

The men’s World Cup quarterfinal stage kicked off on Friday as Croatia eliminated Brazil and Argentina beat the Netherlands. CTVNews.ca has all the latest from the tournament.

Pulled from a sunken trunk at an 1857 shipwreck off the coast of North Carolina, work pants that auction officials describe as the oldest known pair of jeans in the world have sold for $114,000.

Two Mounties who shot a man in his pickup truck at an Alberta rest stop were found not guilty on Friday of manslaughter and aggravated assault.