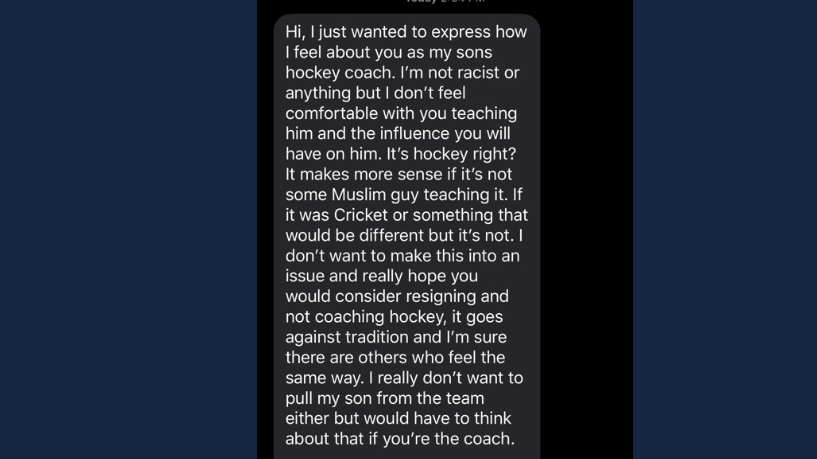 Unfortunately it would be the latter that gave Talha Javaid the online spotlight, but it would be words of support and encouragement that would dominate the conversation.

Javaid is a hockey player from Windsor who travels to Lansing Michigan to help coach a youth hockey program. He goes to school at the University of Windsor and has hopes of becoming a lawyer one day. He also happens to be Muslim.

On October 11 he shared on twitter a text he received from one of his players’ parents. The text begins “Hi, I just wanted to express how I feel about you as my sons hockey coach. I’m not racist or anything but…”

man imagine waking up on a friday and essentially being like “yooo, im gonna go be a racist ass muppet today and tell someone they shouldnt coach hockey because they’re not white, cant wait!!” pic.twitter.com/cNYEbsMB8t

From there the father goes on to explain that he is not comfortable with Javaid teaching his son hockey because “it goes against tradition.” At one point the parent even suggests that Javaid should resign.

“And they try to convince us racism doesn’t exist anymore or in hockey,” wrote Kane on twitter. “Keep coaching and doing your thing because sooner rather than later there will be a lot more people in all areas of hockey that look different than the ‘traditional way.’”

And they try to convince us racism doesn’t exist anymore or in hockey. Keep coaching and doing your thing because sooner rather than later there will be a lot more people in all areas of hockey that look different then the “traditional way”. https://t.co/YV87I9saw0

He says the support has been overwhelming and has even gotten him job offers to coach hockey across Canada and the U.S.

However the 23-year-old student isn’t biting just yet tweeting “Let me get back to y’all about that after I get my undergrad and go to Law School. Y’all wild man. Thank you all.”