WINDSOR, ONT -- Windsor Fire & Rescue and Windsor police are trying to determine if a fire at 2531 Arthur Road was intentionally set.

Firefighters were called to the scene at around two Monday morning.

“I came out on my porch and it was so hot I started sweating”. said Mike Veldhuizun who lives across the street. “The whole thing was engulfed. It was nuts. I was starting to think it was going to spread. Fire department came here quick and got it under control, says Cheryl Donaldson.

Donaldson watched the blaze from her home half-a-block north of the scene, “The fire was shooting from all the windows. It was probably almost as tall as the pine trees in front. It was at least like 10-20 feet above the house."

Crews used an exterior attack in order to try to prevent the fire from spreading to other properties and about an hour after the blaze was first reported crews had it under control. 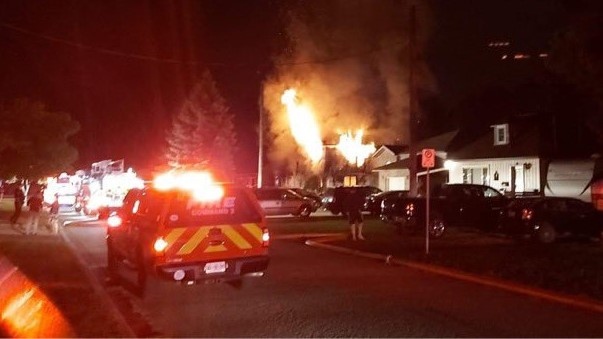 The fire was was so intense it caused damaged to one of the homes next door. The total damage is estimated at $350,000.

“We've been here 35 years or more and the granddaughter just bought it from the grandmother last year then rented it this August,” adds Donaldson.

According to fire officials the three occupants made it out safely thanks to working smoke alarms.

“Glad that everybody got out and nobody is damaged other than their stuff. Certainly it shows the importance of smoke alarms,” said Deputy Chief Andrea DeJong.

The Office of the Fire Marshal was not called in because of the structural damage done.