'I was at the right place at the right time,' Windsor Goodfellows volunteer goes viral after showing act of kindness

'I was at the right place at the right time,' Windsor Goodfellows volunteer goes viral after showing act of kindness

A volunteer with Windsor’s Goodfellows is overwhelmed with the response he’s received since a video of him offering to make a donation on someone’s behalf has amassed more than 27 million views on TikTok.

That someone was local TikTok creator Zachery Dereniowski who approached Danny Curtis on Thursday while Curtis was canvassing in LaSalle along with local firefighters.

"This year was a real shocker to me because I was really going to give it up this year."

Curtis says he was stunned when Dereniowski made a $500 donation after Curtis offered to make a two dollar donation for a newspaper on the social media star’s behalf.

"And so he says, I haven't got no change in my pocket. But he says how much is one of your Goodfellow papers?" Curtis told CTV News. "I said well sir, take a paper, I’ll donate two dollars for that paper."

Curtis explained he had no change at the time, but promised to keep his word.

"He said, well, that's all right. He says you're willing to give me this. And he says, I'm looking for the 'Spirit of Christmas' and he reached in his pocket and he pulled out $500. And so I said, you gotta be kidding."

Curtis said Dereniowski then offered $500 more to Curtis himself, which he refused, instead encouraging the money go towards another organization in need. 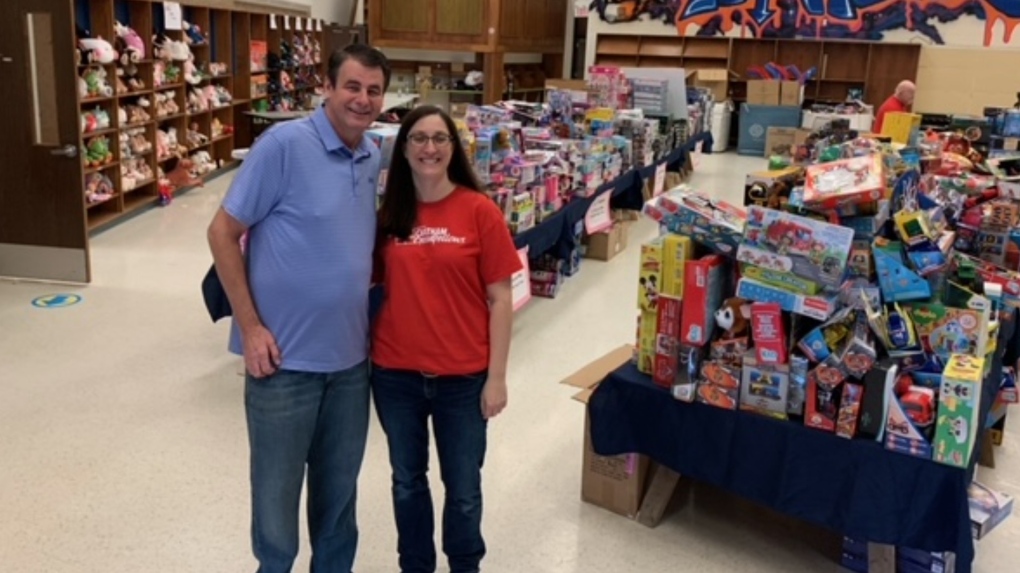 "We're attributing that to less cash, less traffic on the streets and a little less Black Friday shopping," said Jennifer Wells, president of the Windsor Goodfellows.

Wells said on Saturday that demand has gone up since last year’s campaign for the traditional Christmas food boxes, noting the need has also increased year round at the Goodfellows’ downtown food bank. "Our costs have gone up 33 per cent this year, and as of now we've taken on 1000 new families."

Wells welcomed the worldwide attention the viral video gained since it was posted, noting there’s still hope that this year’s goal of raising $370,000 can be achieved through online donations.

“That is our first TikTok that I know of," Wells exclaimed. "MD Motivator, thank you for bringing us into the 21st century! And Danny, he just perfectly embodied the spirit of what it is to be a Goodfellow."

Meantime, Chatham’s Goodfellows are gearing up for their own campaign this year.

Haskell explained, “We want you to turn on your light and be ready for us to show up. We'll be in our red smocks and we'll come out and knock on your door, push your doorbell and we want to see if you give us some money to help us get through our campaign.”

Haskell notes that like Windsor, demand has increased in Chatham and that tap donations will be possible at select locations when their own newspaper campaign continues later in December.

“We do have tip tap this year,” Haskell said. “We’re not all over the place but we're doing it in certain areas that we know that we can use it like when we're out at mall or something.”

Haskell added, “We take care of around 1700 families every year and we want to make sure that we continue that and take care of the people that are in need.”

President Joe Biden said on Saturday that he ordered U.S. officials to shoot down the suspected Chinese spy balloon earlier this week and that national security leaders decided the best time for the operation was when it got over water.

How to stay safe in extreme cold: Recognizing the signs and symptoms of frostbite, hypothermia

Canadians will continue to bundle up in the country's east this weekend as a recent bout of extreme cold persists in much of Quebec and the Atlantic provinces. CTVNews.ca looks at the signs and symptoms for frostbite and hypothermia to watch for if exposed to extreme cold.

NHL commissioner Gary Bettman announced Saturday the league's 2024 showcase will be played in Toronto for the ninth time.

A cold snap that triggered Environment Canada alerts involving eight provinces and territories extended into a second day on Saturday, shattering several past temperature records and leaving thousands of customers in Atlantic Canada without power.

China balloon: Many questions about suspected spy in the sky

Eyes on the sky as Chinese balloon shot down over Atlantic

Eyes were locked on the skies Saturday as a suspected Chinese spy balloon passed over the U.S. Eastern Seaboard -- where local authorities warned civilians against taking potshots with rifles -- before it was shot down when it drifted over the Atlantic Ocean.