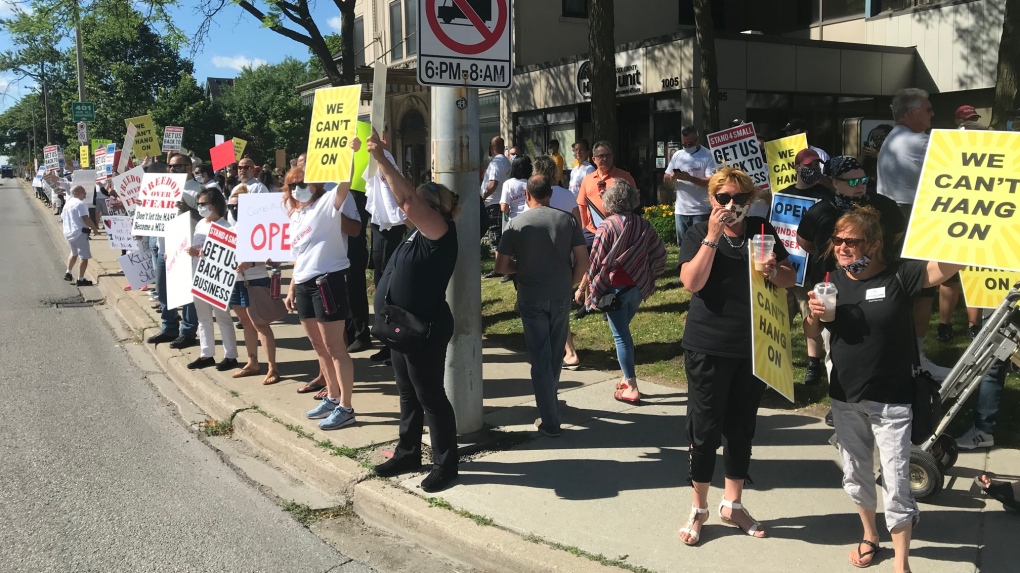 WINDSOR, ONT. -- Hundreds of protesters from Windsor and Essex County are calling on the provincial government to move areas of the region into Stage 2 of reopening.

Many local business owners and residents were reeling from the news Monday that Windsor-Essex would be stuck in Stage 1 of the province’s reopening plan amid the COVID-19 pandemic.
“We’ve listened to all the experts,” says Kim Spirou, owner of Salon Blush. “We’ve done everything the authorities have asked us to do in Windsor-Essex and our health metrics are good so there’s no reason to hold us back.”
The protesters wanted to send a loud message from the small business community, including restaurants, salons and other businesses which are forced to remain closed since mid-March.
“It’s time. All of the other businesses that have been allowed to reopen, they’re very comparable to what we do.” said Katie, owner of Twisted Apron.
Small business owner Laz Sofikitis says they’ve been closed for too long.
“We’ve been suffering. We have 100 per cent loss,” says Sofikitis.
Since the protest Wednesday morning, Ontario Premier Doug Ford revealed details of a new reopening plan for Windsor-Essex. He announced that the region, with the exception of Leamington and Kingsville where the majority of COVID-19 cases are being reported in the agri-farm sector, is recommended to move to Stage 2.
"We’re beyond elated. It just shows you that it’s very important to have your voices heard," said Spirou.
The health unit said the reopening would take effect Thursday, June 25.
"It’s just a matter of ordering some product and getting the menus ready and we’re going to be good to go Friday,” said Fil Rocca, owner of Mezzo restaurant.
Essex County Warden Gary McNamara issued a statement following the news of a partial economic reopening for the region which he said is “both welcome and disappointing at the same time.”
“I share in the distress and frustration felt by the residents and struggling business owners in Kingsville and Leamington, but I also know this news is being welcomed in municipalities from Amherstburg to Lakeshore,” he said. “There have already been layoffs and closures in Essex County and more were sure to follow if the Premier had not made the decision to at least open up part of our local economy.”
The Windsor-Essex County Health Unit said on Wednesday the Environmental Health department, along with the Public Health Agency of Canada, the Ministry of Labour, and Service Canada have attended farms in the area to conduct inspections.

Some Canadians will be receiving smaller CERB payments in June. Here's why.

COVID-19 vaccine may not work in older people, experts say

Yukon to reopen travel for residents of B.C., N.W.T and Nunavut on Canada Day

It's official: Atlantic Canada is 'bubbling' on July 3

No more daily COVID-19 updates from Quebec; Trudeau hopes Legault continues to be 'transparent and open'