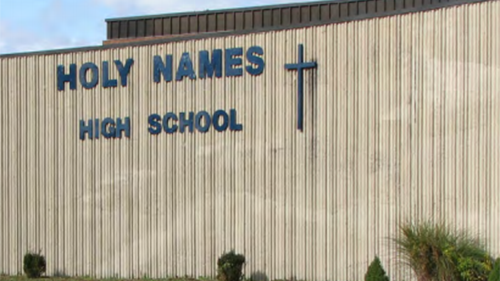 A hold and secure has been lifted at Holy Names high school and Windsor police have arrested two suspects in relation to an incident involving possible weapons.

Officers responded to the 1400 block of Northwood Avenue on Monday.

Police say a victim was assaulted with a weapon believed to a be a BB gun.

Investigation revealed the incident happened in the 2400 block of McKay Avenue.

WPS investigating incident involving possible weapons in the 1400 block of Northwood Ave. Area schools were notified of situation & they initiated protocols as necessary. Holy Names has since lifted a hold & secure. No schools directly involved in incident. No injuries reported.

Police say area schools were notified of the situation and they initiated protocols as necessary, but no schools directly involved in incident.

No injuries were reported. Police also say there was no direct threat to public safety.

Police have since arrested two suspects in relation to the incident. The weapon is still outstanding.

Police are asking anyone with video or information to contact police or Crime Stoppers.