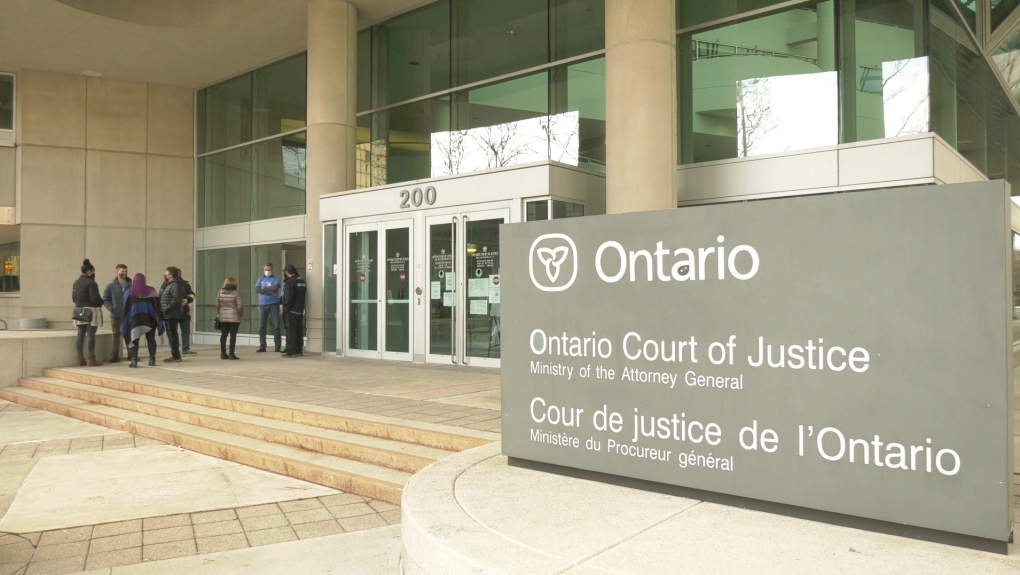 Family and friends of Maresa Cappelli gather outside of the Ontario Court of Justice in Windsor, ON on Friday, December 4, 2020 following the sentencing of Stephen Brewster, who pleaded guilty in the hit-and-run crash that left Cappelli with a life-altering brain injury. (Ricardo Veneza/CTV Windsor).

WINDSOR, ONT. -- The driver who pleaded guilty in a hit-and-run crash on Highway 3 that left Maresa Cappelli with a severe brain injury will spend much of the next three years behind bars.

On Friday, Stephen Brewster was sentenced to two years for dangerous driving causing bodily harm and one year for failure to remain at the scene of a crash.

"I think all we really cared about was just to get this part of the story closed off and this chapter end and onto the next because, it’s just dragged out since last June," said Frankie Cappelli, the eldest brother of Maresa. "We’re just glad it’s over now."

It was on June 21, 2019 when Brewster veered into the opposing lane and caused a head-on crash that sent both vehicles into the ditch off the highway in Essex.

Maresa and her father, Franco, were in one of the vehicles. Maresa suffered a number of injuries including severe head trauma in the crash while her father escaped with three broken ribs.

Court heard Brewster left on foot before grabbing a ride with an unsuspecting co-worker stuck in traffic.

The young Cappelli remains in dire condition as she’s cared for by her mother in the Sault Ste. Marie area.

"If she falls out of the bed at night, that could be it for her," said Frankie, outside of the Windsor courtroom on Chatham Street. “Then you’re eight hours, ten hours away so, it’s hard going to bed at night worrying about her."

In her decision on Friday, Justice Christine Mallott told the court Maresa remains non-verbal, may be blind in one eye, needs support to walk and sleeps just two hours a night.

Mallott added it’s unknown how much Maresa is aware of what is happening around her.

"Mr. Brewster has essentially destroyed her life," said Mallott in reading out her decision.

Mallott ordered that Brewster serve the sentences consecutively and be given credit of 159 days for time already spent in custody. Brewster was also given a 10-year driving ban and must submit a DNA sample to the Windsor Police Service.

While Mallott recognized Brewster was remorseful for his actions and spared the family a trial with a guilty plea, she also highlighted an "ongoing pattern" of bad driving behaviour and Brewster’s prior police record including arrests concerning domestic violence incidents.

Mallott also recognized Brewster had taken a number of courses while in custody at the South West Detention Centre and is open to further counselling but, imposed the driving ban because she felt Brewster was at-risk of offending again.

Brewster pleaded guilty on Feb. 4 but, due to the COVID-19 pandemic, the sentencing hearing was delayed.

Frankie had hoped Mallott would sentence Brewster closer to the maximum of the three-and-a-half to four-year range the Crown had proposed for the dangerous driving offence; however, with the court case now behind the family, Frankie says the focus is on Maresa.

"She loved life," said the older brother. “She wanted to travel and that’s kind of put on hold now for quite some time probably.”

Court heard the then 20-year-old Maresa had just finished her schooling to become a dental hygienist and was looking forward to starting her career.

Frankie says his little sister loved the outdoors, turned him onto kayaking and loved to create art.

"She’s one of the people that got me into art as well too," said Frankie. "She’s a talented painter, was at least. Now it’s all hand painting and you can’t tell."

The devastating crash has made a year made difficult by the pandemic even harder.

After seeing what happened to his sister, Frankie urges people to be more aware of their actions and the impact they can have.