'He lost a lot of friends and it really affected him': Windsor Remembrance Day ceremony honours veterans

WINDSOR, ONT -- A smaller, but no less powerful, Remembrance Day ceremony in Windsor marked the 75th anniversary of the armistice of the Second World War.

At 11 a.m. on Wednesday, the ceremony put on by the Windsor Veterans Memorial Services Committee (WVMSC) at the cenotaph outside of city hall, which usually sees the grounds full, saw much-reduced attendance as officials urged the public to watch a live stream of the service from home due to the COVID-19 pandemic.

“We can’t have the kind of celebrations we generally have but, we will celebrate the sacrifices that our veterans made,” said George Rizok, a 25-year veteran of the Corps of Royal Canadian Electrical and Mechanical Engineers (RCEME).

The ceremony was streamed live by the city and CTV News Windsor.

Rizok says the day reminds him of the sacrifices his loved ones made for Canada.

“I remember my father, the pain that he suffered from serving in the Second World War,” said Rizok.

Putting on his own deep navy jacket and military beret adorned with a gold emblem of the RCEME, tears come to Rizok’s eyes as he reflects on what Remembrance Day means to him.

“When I put my uniform on, I think about what my uncle Joe said about the guys that didn’t come back,” said Rizok. “He lost a lot of friends and it really affected him.” 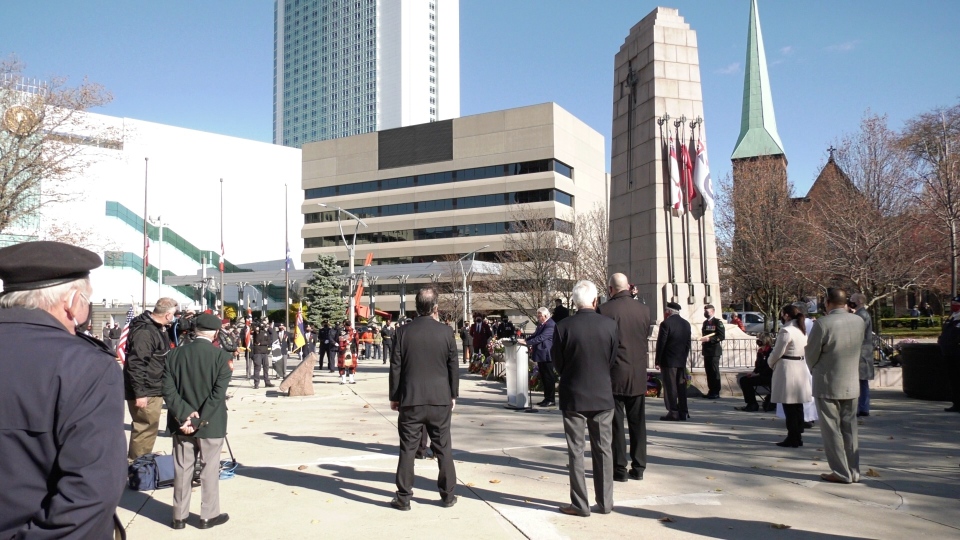 As Rizok can attest, the pain stemming from the ravages of war are not easily pushed aside. The subject was at the core of a poem written and read by Windsor Mayor Drew Dilkens at the ceremony called the ‘Scars of War’ about a young man returning from battle.

“It isn’t easy to heal the scars of war for they reside deeply embedded inside Jack’s core,” read Dilkens. “For this man was called to serve once diploma was in hand, and his service was more than playing trumpet in the military band.”

Rizok stressed there are many veterans still in need of help today, noting struggles with post-traumatic stress disorder has led many veterans to suffer from homelessness and other challenges.

“Especially the new, young veterans that are coming back from theater. Some of them are suffering tremendously,” said Rizok.

The challenges of the pandemic inspired Theresa Charbonneau, a Silver Cross Mother of the late Windsor Cpl. Andrew Grenon, to share words of solace from the 1927 poem ‘Desiderata’ by Max Ehrmann.

“In the noisy confusion of life, keep peace with your soul with all its sham, drudgery and broken dreams,” read Charbonneau. “It is still a beautiful world. Be cheerful. Strive to be happy.”

The somber ceremony remembered those who gave their lives for the peace and freedom many enjoy today. Rizok points to the unity shown 75 years ago as a reminder of what Canadians can do in times of crisis.

“The pandemic I think has brought a lot of people together, not apart,” said Rizok. “We realize that this is very serious and that as Canadian people we are fighting this together and we’re going to get through this together.”